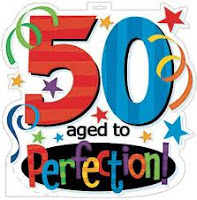 Five days in to my 50 day countdown to my 50th birthday and following this post, here is the first update (a bit late). After five days of trying to eat sensibly I lost 400g (which could be 1lb as my scales only do 100g increments). Extrapolate this to the full time available and I will have lost 4kg. Sorry, not good enough for the emotional cost of exposing my efforts in public. (I'm only doing this as a desperate attempt to get me to stick to it.)

In a bid to up the ante I found myself googling things like: drastic fad diets for quick weight loss. This goes against everything I believe in about healthy and moderate eating for life being the best way to look and feel great. I humbly apologise to my guru and idol Mireille Guiliano (French Women Don't Get Fat, Knopf 2005) but I'm desperate.

I once did the cabbage diet (when it was called Scarsdale) and only lost a few pounds out of the promised 10+ over the week. I once ate only protein and was losing 2lbs a day and running a low fever. By day 5 I could feel my heart racing and I felt sick, so I stopped.

My mother, back in the 1970s, had a book in the house (which means she bought it, which tells a lot about me) called Fad Diets (maybe 100 FDs or The Best FDs?). Clever author made them all up - brilliant money maker. I could have written it myself and I was only 14. One diet was a hard-boiled egg and a tomato six times a day with plenty of water and tea or coffee (no milk). I did this one for a couple of days. I added two Ryvita crackers to each meal but still gave up through boredom. It worked though - obviously. Another fad diet was six yogurts during the day. I don't know if it was suggested but my idea was to choose something small and up to 200 calories, and eat it six times a day. You can change the foods every day but not during the day as that would be less of a fad and starts to get complicated (like a real diet).

The high protein with plenty of fruit and vegetables but very restricted and prescriptive diets are great for a fortnight's blast. Even they say not to do them for more than two weeks as they're very low calorie and low carb.  However, I could enjoy lean chicken or fish with a scantily dressed salad for supper every night for a while. However, I'm no longer a single person who can have no other food in the house and go to bed at 7pm with a book in order to avoid the kitchen. I have (as we all do) my own personal restrictions and temptations:

1. I don't have meat in the house so no chicken and salad based meals. I could have salmon every night but fish is very expensive here. Or eggs but these things often do eggs for breakfast or lunch.

2. I have to (because I want to) sit and eat supper with my 3yo every evening. I want us to eat (basically) the same so it has to be something she likes as well.

3. I'm not prepared to gamble with my health even for a few weeks.

4. I will only eat real food and with as little processing and chemical input as possible. I prefer to be satisfied by and luxuriate in a full-fat yogurt than a 0% fat with added aspartime which leaves me still craving for something richer. Ditto for a good drizzle of healthy olive oil on my salad. I am not afraid of a bit of fat.

5. I know me, even though it is healthier and cheaper to eat an orange (or grapefruit) a day, in my house they tend to sit around until they go moldy and have to be chucked. I will benefit more from my glass of 100% fruit juice.

6. I am not afraid of a bit of fat (see 4.) but sugar is the enemy in my book. Luckily I'm not that partial to sweet food so I can easily go without dessert and prefer a bunch of grapes instead.

7.  There is probably a lot of truth in the belief that going wheat-free does you a lot of good and you feel great but I need to have something filling, quick and easy that I enjoy in order to stick to it so my toast is still in. I can't do it all at once and it may be too restrictive if you are already meat-free.

8. You need to restrict calories. Simples.

So with all of the above in mind, I have written my own (not so fad) diet and started it today. This post is quite long enough already so I'll report back with full details and results soon. (i.e. as soon as there are results.)