With 12 weeks exactly until January 1st 2013 (on Tuesday 9th Oct.), I took up Exmoor Jane's #DIYdetox challenge. No it's not juice fasts, coffee enemas and cayenne peppered grapefruit. According to Jane, it's not how much you eat but what you eat that counts. Or rather what you don't eat. Or is it both? Anyway, I hope she's right as I haven't been exactly frugal this week.

My goal for this week was to cut out sugar completely (except those sugars naturally occurring in fruit, vegetables and grains), cut out dairy and meat completely, and cut down on caffeine enough to be able to cut it out from next week. Of course no fried snacks or processed ready made food goes without saying - real food only. Here are my reasons: 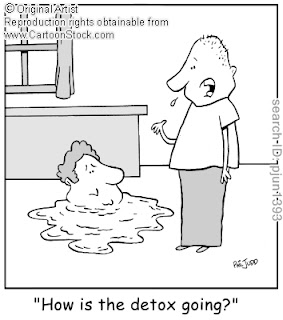 Sugar - it's just plain poison, simple as that. Also I had gestational diabetes which means I have a high risk of getting type 2 'old-age' diabetes (which my father has) in the future. It makes sense for me to cut down on the sugar now.

Meat - I have long aspired to be vegetarian. I did it once for quite a long period and my own kitchen has been meat-free for almost 20 years (apart from a few months when I thought it necessary to feed my newly weaned baby some meat). There are lots of reasons (which I keep threatening to blog about and really will one day) but the biggest one for me is the unequal distribution of food in the world, partly caused by the meat industry.

Milk - I accept that milk isn't as healthy as the Milk marketing Board would have us believe. I'm a bit unhappy about giving up cheese, yogurt and butter though. My reasons are not so much detox related as connected to the argument against eating meat. It doesn't matter if the cattle are raised for meat or dairy, the global effects are the same. So dairy is out for now.

Caffeine - I started today with green tea instead of my usual coffee and milk. I reckoned it was a step in the right direction and one bag lasts all day with about six top ups of hot water. However, at about 5pm I started a horrific headache. I ended up drinking two big mugs of strong black coffee and taking two paracetamol tablets. The headache finally passed at about 9.30pm. Now that is frightening. If not drinking caffeine for 20 hours can bring on that amount of pain that's a good enough reason for me to stop drinking it.

No processed food - real food only so that I know what's in it. No non-food chemicals. Also I love cooking so why pay for some company to cook for me and then pay for the packaging etc...

Results:
I pigged out this week, I admit it. I was eating for Britain (or Israel. Or both). It was partly to compensate for not being able to fill up on endless cups of coffee with milk. Also partly because I didn't plan properly so I was winging it and grabbing food willy-nilly as long as it didn't violate the rules. And a big partly because this was the week before college starts and I have two new courses to teach over which I was more than a little stressed out.

I grazed on nuts and raisins, anything and everything (legal) on toast, and any leftovers wrapped and put in the fridge for tomorrow were taken out later and eaten the same day. Despite all the above, I lost 900g which is exactly 2lbs. I didn't cheat once during the week - no sugar, meat, dairy or processed foods and just one black coffee and one green teabag per day.

How do I feel?
Incredulous that I lost 2lbs but not particularly vitalised yet. Jane is convinced it's the wheat but I'm not ready to let go of that completely yet.

Week 2:
This week I'm continuing with no sugar, meat, dairy or processed foods. I'll still have my one green teabag but I'm reducing my one coffee/day to half a teaspoon of coffee.

My new challenges are:
1. Only having bread/toast for breakfast and no bread for the rest of the day. (But we may have pasta or crackers for supper.)

2. Eating supper with DD between 5pm and 6pm and nothing in between or after apart from my tea or water, fruit, vegetable sticks or a handful of nuts, raisins or seeds. It's a tough challenge for me but I'm putting off the time when I'll have to add exercise.