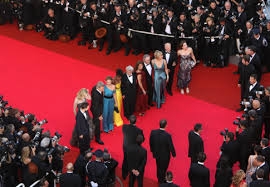 Gemma (Helloitsgemma) is perhaps the first bloggy friend I ever made and has been a constant source of entertainment, information and support ever since. Her son Noo, being a year older than DD, gives me insight into what's just around the corner for us and you can be sure I've taken notes. I've also not been shy about commenting on Gemma's posts. As a result of this she has honoured me with The RAA (Reader Appreciation Award). I don't know when the RAAs are being officially handed out, where, or what I'll wear on the red carpet but meanwhile I'm thrilled of course and want to thank my family etc...

Part of the deal is to answer some set questions about myself and tag some readers who I really appreciate. So I'll answer some questions and tag my loyal fans  friends. I did mention to Gemma that I may make up my own questions because, quite frankly, I'm not going to write about my first snog, my dream car is a car, any car as opposed to Shank's pony who I use atm, and I've already written about being naked in public. So my questions are all topical to previous posts this week and are as follows:

What happened to the alleged robbers I helped to catch?

Nothing. They are all back working on the building site and both get-away cars featured in the robberies are parked in the road. Obviously it wasn't a robbery at all but rather part of their pay package or another similar arrangement.

What happened about the name calling?

I spoke to the teacher about Sam-u-el and asked her to watch and see if there were any shenanigans going on (I didn't mention the silly sausages). She was surprised as X and Y are particularly friendly with DD. Anyway, at the end of the day she told me that it was actually X, Y and Z. She told them that it wasn't a nice thing to do and they agreed that they wouldn't do it again. She also spoke to all the children about name calling. DD came home all smiles and announced that she's not Sam-u-el anymore but a bottle is now called Sam-u-el instead. An obvious substitute.

What happened to DIYdetox Week 4 that was supposed to appear on Tuesday?

Well, I didn't lose any more weight last week. I don't mind about that as it still means that I lost 5 lbs in the first 4 weeks. Apart from that most of the detox bit has fallen apart. I'm still not eating meat or sugar. I'm afraid dairy and coffee have crept back in. I'm also still eating bread which I never really managed to give up. Here are the issues:

Coffee makes me eat less. When I sit down to an evening on the computer after DD is asleep I am satisfied by a cup of coffee with milk in a way that a herb or green tea just doesn't do it for me. I can enjoy the coffee and not eat anything else whereas the teas leave me foraging for snacks.

Bread is essential to me. I'm not always at home to make that big salad or heat up the soup for lunch. On the run it's just easier to take a bread roll filled with some of that salad stuff. It's also cheaper and more satisfying.

Dairy. I have a huge problem with dairy. I love cheese (though I could probably find a milk substitute for the coffee). My problem is that the environmental and humanitarian reasons I cited for not eating beef also apply to dairy. By the same token, it's ridiculous not to eat chicken if I'm eating eggs. I don't know what to do about this - it's a huge issue for me and I need to think about it in more depth.

Here are DIYdetox weeks one, two and three if you need to catch up. Basically, it's ExmoorJane's fault. Meanwhile, I have a new secret weapon which I'll blog about next Tuesday.

Who are you passing on the RAA to?

Many of my most loyal readers don't blog. And Anna (Adventures of a Middle-Aged Matron) already has this award on her mantelpiece. However, Gilly (Brainstorm), Jazzy (Jazzygal), Mich (Mummy from the Heart), Emma (A Bavarian Sojourn), Candi (Looking for Blue Sky), Liska (New Mum Online), OM (Older Mum in a Muddle), and Anya (Older Single Mum) all have my undying gratitude for making me feel like I'm not just talking to myself. Thank you from the bottom of my blogger. No pressure to actually accept the award but should you choose to do so the original questions (about nudity and snogging etc...) can be found at Gemma's. Or make up your own questions. Or just say thank you and leave it at that.