Yes, yesterday's Silent Sunday photo was all the booty for DD's 4th birthday party tomorrow. I managed to persuade her that it's going to be a girls' party even though there are about five boys she wants to invite. I couldn't think of what to do with boys and our small apartment suits a party of seven girls rather than a mixed party of 12.

We're having a jewellery party. (See what I mean about what to do with the boys?) I bought the seven little boxes for about a pound each in the craft shop. I have a little round mirror to stick in each box (in the lid) and felt squares give the inside a bit of softness and colour. Then they will decorate them with stickers, some jewel-like and others just shiny, and coloured markers.

The jewellery was all bought in the shekel store (about 18p per item). You'd be surprised how those 18ps add up! First they'll each get a bangle in a game of pass the parcel. Not sure whether to have the other items as prizes for games or to just let them choose. I've a necklace, a bracelet, a ring and two hair slides for each of them as well as the bangle of course. It all just about fits into the box. 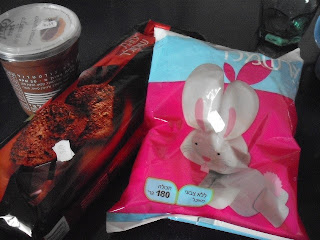 Supper is pizza (from a box of pizza squares in the freezer) and oven chips. I'll also cut up some cucumbers and tomatoes. Chocolate milk to drink and the cake obviously.

About the cake. I've bought this - a cake, some milky chocolate spread, and marshmallows. I may also have some coloured sprinkles in the cupboard. And of course I have left over candles from last year. Somehow I'll put it all together to make a birthday cake. Watch this space! Anyway, all the cake stuff cost 23 shekels (under 4 pounds).

I'll go an get some party decorations tomorrow. Not balloons as I'm allergic to them but I've already bought the plastic balloons on sticks - one for each child. And I've cleaned so bring it on! 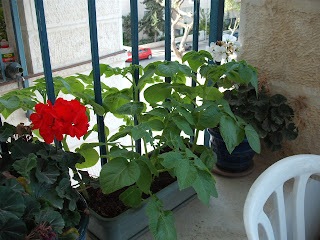 While we're catching up I thought I'd show you how my potato plants are doing. I featured them in a Silent Sunday a couple of week ago when I'd just planted the sprouting potato skins. I'm sure the pot isn't big enough for any potatoes to actually grow under the soil but the greenery on top looks great.

And finally, I was right not to go to the kindergarten opening, You'll remember I told you how DD doesn't like to perform when I'm there and joins in much better when I'm not. The teacher told me she was great and joined in everything. The proof is in this short (21 seconds) clip of Mayor of Jerusalem, Nir Barakat, dancing with the children. They're calling it 'Barakat Style'. DD is right in front of him in a pink top. You see her coming round, then she disappears for a bit and finally she jumps out at the end. I kvelled. (Yiddish kveln to be delighted, from Middle High German.)