Juice And Smoothy Fast - Why I'm Doing This 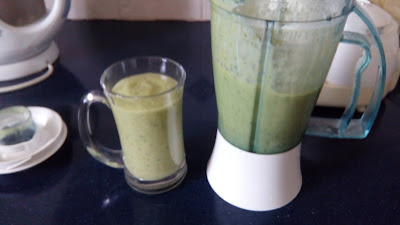 I've been trying to be vegan for years now. It all started when I realized that cows and chickens have the same miserable lives and eat as much grain that could have been fed to people starving in Africa, whether they are destined for the meat industry or for dairy and eggs. And the same drugs, hormones and/or antibiotics, are given to both so you eat them too even in milk and eggs.

I read the books exposing the food and advertising industries with information about how they control what we eat and even how we are educated to eat. I read about how processed food is saturated with sugar and salt so that we eventually become addicted to it despite careering headlong into type 2 diabetes, heart failure, and strokes. I read about how the international food fairs are all about chemical additives and nothing to do with real food, and how they are shrouded in secrecy.

I read about the pink slime and fat collected from the abattoir floor that goes to make salami and sausages. (It comes out white after they have washed it with ammonia so they have to add red dye to make it look like meat again.) I read about the legal amount of puss from a cow's udder that is permitted in each litre of milk. And I read about how the male chicks in the egg industry are thrown straight into the crusher. (Why don't they send them to the shnitzel and nugget farms?)

And all the time, along with the rest of the developed world, I have been getting fatter and fatter.

In one binge viewing I watched the two most thorough arguments for veganism - Forks over Knives which is no longer available on You Tube, and 101 Reasons to be Vegan which is. After watching I couldn't wait another day and went vegan overnight.

I lasted 12 days because it was the week before Pesach (Passover) when there's very little you can eat anyway and I was staying with my mother and sister in London so I wasn't even in charge of my own kitchen. It was a silly time to start so I gave up and vowed to start again on my return home after the festival. I didn't. But I felt extremely guilty about it.

Trying to get myself motivated to go back to healthy eating, I watched Fat, Sick, and Almost Dead. It's the story of Joe Cross' 60 day juice fast and how Phil Staples and others have also done it and changed their lives. Not only did they lose weight but there were numerous health benefits as well.

I am not sick, yet. I'm very overweight, I'm addicted to carbohydrates, I'm unfit, I'm always tired, and I might be pre-diabetic (my father had it and I had gestational diabetes when I was pregnant) but I was too depressed about it to go for the blood tests.

The juice fast looked like something I could enjoy doing and I need a quick jumpstart to get to me motivated. However I'm not 100% on board with juicing because you don't get the fibre which is important for your intestines. And you probably don't get to feel very full, which is important to me if I'm going to stick to it.

So I started my Smoothy fast today. I'm committed to 5 days of fruit and vegetable smoothies, one coffee with oat milk in the morning, and lots of water. Tomorrow I'll tell you how it went today.