Here's the plan in case you missed it yesterday. Sunday 22nd May 2016. I woke up raring to get started on my smoothy fast, Then I remembered a few things:

1. If I didn't have a cup of coffee I'd wind up with a splitting headache later in day.
2. I didn't have time to make a smoothy before leaving for work.
3. One lady in the film said that after her first juice she had to spend quite a long time in the loo. I had two classes to teach back to back followed by two student tutorials. I couldn't risk it.

So I drank my coffee with oat milk, as usual, and went to work. By mid morning I was starving. I started to worry that only drinking smoothies was not going to satisfy me. But actually the hunger passed before I even got home.

I came home at 1.15pm and foraged around the kitchen for ingredients for my first smoothy. This is what I found: 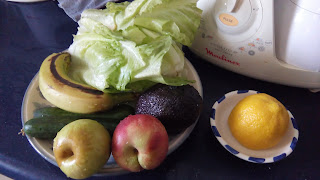 I got out the old, and rather weak looking blender, and gave it a wash as it'd not been used in a while. I put in a cup of water and added all the fruit and vegetables cut into smallish pieces. 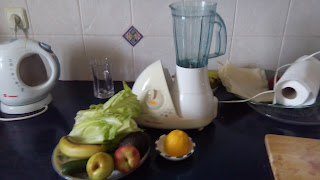 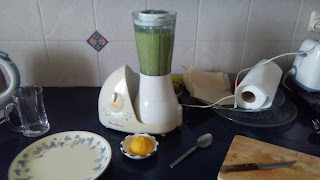 It was delicious. Maybe slightly too tangy and I should put in less lemon next time, but basically delicious. I drank one glass of it and was full. Seriously. I was full. The remaining half went in the fridge for later. 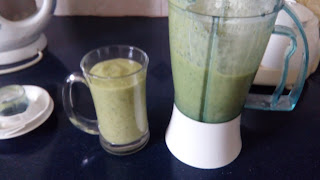 By 3.15pm I wasn't hungry but I had my usual mid-afternoon slump when I feel like taking a nap. I guess it takes more than one smoothy to start feeling invigorated, LOL. I couldn't take a nap as I had to go out so I ploughed through the fatigue and survived. Still not feeling hungry but I could have done with another coffee round about now. However, I also want to wean myself off the coffee addiction so I didn't. I hoped I wasn't getting a headache.

4.30pm and time for a snack. By this time I'd been shopping and was able to make a fruit smoothy with melon, grapefruit, blueberries and some fresh ginger. Ginger is supposed to be very good for you doncha know. I had the idea of half a cup of smoothy topped up with soda water to make a shpritzer. It wasn't good. I finished the second glass without the soda and it was better. Not great but better. Like drinking juice with a load of sludge in it. No headache yet. 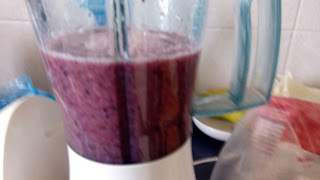 6.30pm Headache starting. I needed a coffee with oat milk. So I had one.

7.30pm and time for supper. The other half of my green smoothy was in the fridge waiting. I drank it. It took me a long time to get through it - an hour in fact. I didn't really want it. This regime is not exciting. I thought about taking a salad to school for lunch tomorrow instead of liquidizing it into a smoothy. I would add some olive oil to dress it and probably some salt and pepper. I also thought about buying a stronger blender.

I can't believe I made fresh bread rolls and they're sitting on the side cooling at this minute. Love is.... making bread rolls for your daughter's packed lunch because that's what she likes, when you yourself are on a smoothy fast. #Torture.

9.45pm A cup of herbal tea. I can honestly say that I have not felt hungry at all. I was bored and tempted to nibble on forbidden unfruits, but not hungry. Otoh, I have a definite headache. And so to bed.