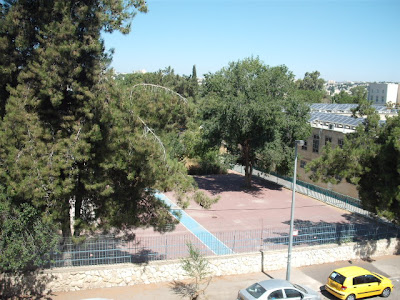 This playground in the school opposite us, is the proposed site for DD's nursery school. They start on August 27th so there's plenty of time, it being only half way through July and all.

Why is this happening? It's the result of a good thing actually. A few months ago the Knesset passed a law that free education should begin at age 3 rather than 5 as had been the case. When I say 'free' it's a loose term but it's a lot cheaper than a private nursery. For example, the nursery finishes at 1.30 or 2pm so you pay for the afternoon programme until 4pm if you're working, which most mothers are.

Many families who were in the private sector subsequently decided to register for State nursery. The economic situation was also a factor in this decision for many. Added to that, there have been whole new neighbourhoods built on previously agricultural land nearby. No schools and two nurseries were built to accommodate this influx of about 2000 families. And more building has started.

In my area, there were 70 children with no place for the coming academic year. The solution has been twofold. 1. To subsidise some of the private nurseries in order to encourage parents to stay where they are. 2. Build at least three (that I know of) new nurseries. Two of them are planned for one of the palygrounds (pictured) in the school opposite.

I know they will be pre-fabs and so they really don't take too long to put in place and connect up, but I'll be a lot happier when I see something happening. I'll keep you posted.
Posted by Rachel Selby at 7/17/2012 08:59:00 PM

Email ThisBlogThis!Share to TwitterShare to FacebookShare to Pinterest
Labels: life in Israel, motherhood