Sleeping At Heathrow, Her Handbag, & His PR Stunt

What a palaver eh? So much information and mis-information it's hard to get a grip on the truth. Having been following the discussions avidly (and joining in as much as the Daily Mail will allow me *ahem*) I've decided to analyze the plot as it thickens by the minute. My theory is that the Media Networking Consultant, Alan Lane, orchestrated the whole thing as a huge self-promoting PR campaign for his business.

3. In 2006 they needed to downsize again and, in a panic, they sold the flat before the bank foreclosed. Good move - they released £190,000 in equity. And they rented for between £850 and £900 per month for the next 7 years. Bad move - a quick division sum of £190,000 by monthly expenses would make it clear that this money could not last more than about 7 years and then they'd have nothing. On the other hand buying a flat for £150,000 (not necessarily in Poole or even in Dorset) and living modestly would have given them security for life.

4. In 2013 they moved to Canada with the offer of a good job for him. He was 69 and she was 60. The move probably wiped out any money they had left. The job only lasted 6 months. They returned to the UK with nothing in June 2013. The story goes that they lived with friends for a while and then moved into the airport. One report says they've been in the airport for 5 weeks so that was a lot of living with friends - over a year's worth in fact.

5. They pay £300 a month to keep their stuff in storage and £400 a month to stay 2 nights a week in a local B&B. A quick look on Zoopla shows 56 properties for rent for under £500 pcm in Dorset. And other counties are probably cheaper. He gets about £800 per month in pensions and her state pension will kick in this year (if she is 63 before 30th September). Before that she's entitled to £280 a month in jobs seeker's allowance but can't claim it because they've no address and she can't get to the job centre from Heathrow every week. Hmmm, these are solvable problems much less drastic than living in the airport methinks.

6. They have a bank loan to pay off which is costing them £485 a month. Last year he earned an extra £7,000 from his consultancy business but no guarantee that he will do the same again this year. She has been offered work as a residential carer but won't leave him. For goodness sake, it's not like going into service with only Boxing Day and Mothering Sunday in which to go home and visit. Take one of those jobs for a year, come home every weekend, and pay off the loan while he lives in the rented place with his £800 pensions.

7. Here's where the thick plottens. They stay in a B&B near the airport for two nights a week where, unusually, they have use of a washing machine. By amazing coincidence there is a B&B close to the airport which is owned by an older couple called Alan and Katrina - same names! On the forums people have claimed to have seen their photos on travel websites and confirmed that it was them, before the photo was removed. Others have allegedly called late at night and they've picked up the phone giving their surnames - Lane and Smith - same as the airport couple. Someone said the B&B is registered to a Mr Alan Legge. (In the DM he has been called Alan Lane, Legge, Page and Parks so even they aren't sure, LOL.) You can't trust everything you read in a forum but how difficult is it for someone to go down there and check? Eh Daily Mail?

8. A very kind lady felt sorry for them and set up a Go Fund Me collection to raise £2,000 for the deposit and first month's rent on a flat - this apparently has been the problem. Although with all their affluent friends, connections (he's a media network consultant), and two daughters in Canada, I find it hard to believe that no one could have lent them this small amount to get a roof over their heads.

9. It was announced that the couple were to appear on Loose Women, ITV, today. On the Loose Women fb page people strongly expressed their suspicions. The announcement was removed and there is no further mention of this tv appearance.

10. The Go Fund Me fund reached £9,270 and the lady who set it up was urged to stop further donations. She was very upset by it all but she did stop the campaign while explaining that the DM had assured her they had checked out the story and it was legitimate. Another comment said that Go Fund Me are investigating the whole affair after complaints have been received. Who knows?

11. The Daily Mail finally related to all the accusations, after ignoring this part of the story way after it had become 'breaking news', by saying the couple are devastated by these false accusations. Meanwhile the story has gone global.

12. And here is where it all becomes personal. One comment on the DM article said that Katrina's handbag was Louis Vuitton. On the Go Fund Me site another comment referred to her designer handbag. The thing is, I have that very same shoulder bag (albeit in taupe instead of black) which I bought for £8.50 in Primark last April. You can see Katrina's bag here (bottom picture). And here is mine: 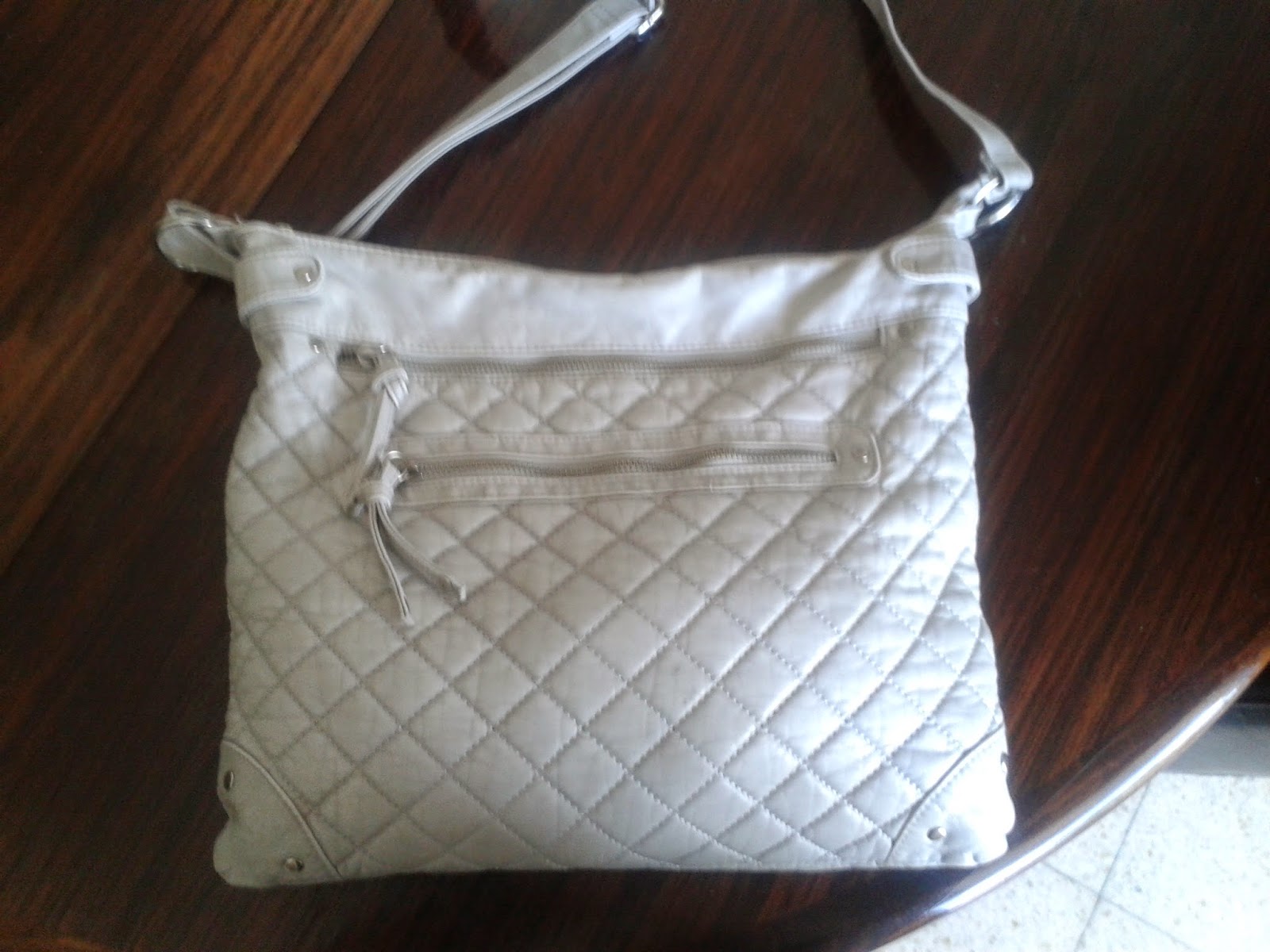 So there you have it. Loads of people weighing in with all sorts of facts that have not been verified. A couple who seemingly wanted someone to save them because they cannot bear to live in something less than they have been accustomed to - even though they cannot afford it.

My own theory at this point is that they may or may not run a successful B&B but the husband, who runs a media networking consultancy, has just made the biggest successful ad campaign for his services. The story is global. He's won.

Email ThisBlogThis!Share to TwitterShare to FacebookShare to Pinterest
Labels: Alan Lane and Katrina Smith, my issues, Sleeping at Heathrow Airport.