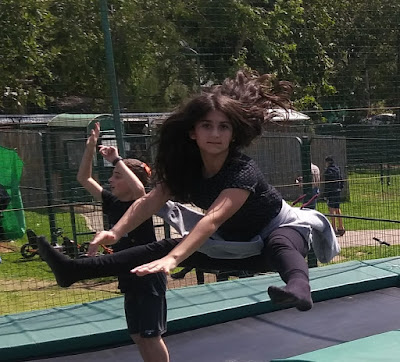 I didn't get round to doing Reasons 2B Cheerful last week and this week I'm mega late. So lots of catching up to do. The linky is with Becky on Lakes Single Mum.

1
Purim in the Park
We had a blast. On Thursday we went to Kfar Saba with friends, to a big park for a picnic. This was our festive meal as outside Jerusalem they celebrate Purim a day earlier. (Walled cities like Jm celebrate a day later - dunno why exactly except that Shushan, where the story happened, was a walled city.) [Update: I found out why. The fighting only stopped outside Shushan a day later.]

There were trampolines in the park and elastic jumping thingies that the children loved. We also brought roller blades and scooters so we were well prepared for a long day in the sunny weather. And the weather didn't disappoint.

2
Butterflies Everywhere
On the way there we commented that there were loads of butterflies everywhere. And in the park there were even more. The next day there were reports in the news about how millions of Painted Ladies had swarmed all over Israel on their annual migration from Arabia and Africa to Europe for the summer. It happens every year but because of the high rainfall this year, there were more than ever before. Apparently these exact butterflies won't survive to make the journey back south in the autumn, but their offspring will.

3
Queen Esther
We returned to Jerusalem on Thursday afternoon to go to the reading of the Purim Story (The story of Queen Esther) at our friends' house. The 'rule' is that  you are supposed to hear it read twice - once in the evening and once in the morning. It's great fun. Many people in fancy dress and every time you hear the name of the wicked Haman, you shake your noise makers and hiss. As fun as it is, once a year is enough for me. I had intended that DD sit with me to hear it too but the other children disappeared downstairs to play so she also disappeared. However, she'd already heard it in school last Tuesday so she was covered.

After the reading, we all eat. People bring food to contribute to the meal. There are some very wonderful and creative cooks in this crowd. I bought stuffed vine leaves and carefully took them out of the tin before leaving home so they looked a bit home-made. They almost all got eaten so that's what's important.

4
Liquid Courage
On the Friday, which was Purim in Jerusalem, DD and I delivered some Mishloach Manot (food parcels) and then went out for lunch. Just the two of us as we'd had our Purim meal in the park the day before. One family turned up at our house dressed as characters from The Wizard of Oz with a basket containing all sorts of Oz symbols. The miniature liquid courage has gone down well in a hot toddy each night for me. And I have one serving left for tomorrow night too.

5
A Lovely End
We stayed in on Friday night but went to friends for lunch on Saturday. A great end to a lovely, low key and relaxed Purim weekend (except for the Costume Drama on Tuesday).

And now I'm writing this during a massive electrical storm over Israel. It's of The Sound of Music proportions. I'm a little disappointed that DD hasn't woken up and come running into my room so we can sing My Favourite Things while jumping on the bed.