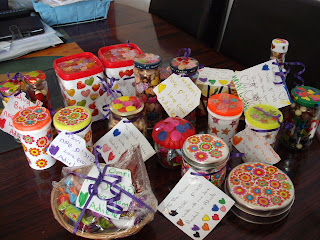 As a follow up to my Silent Sunday picture yesterday. This was our Mishloah Manot for the festival of Purim. Purim is all about the story of Queen Esther and the wicked Haman. Apart from dressing up in costume and eating and drinking a lot after listening to the Purim story read aloud and trying to drown our every mention of the wicked Haman with rattles, whistles, boos and stomping of feet... apart from that, one of the customs is to give two ready-to-eat foods as gifts to at least two recipients.

"It is meant to ensure that everyone has enough food for the Purim feast held later in the day, and to increase love and friendship among Jews as a counter to Haman's assertion that the Jewish people are characterized by strife and disunity." Wikipedia/Mishloah manot

It's great to buy all sorts of fun edibles and get the children involved in wrapping them, writing cards and delivering them on the day. Unfortunately - or fortunately because everyone has so many friends - it has deteriorated into a grand swapping of sugary junk (sweets, chocolates, biscuits, etc.). The kids love it. This is how it works:

You spend an enormous amount of money on sugery junk, spend a few hours wrapping it up nicely with homemade cards, you take them round to your friends and gleefully hand them over to your friends's children, and finally you return home to find a whole pile of similar junk left on your doorstep by other friends. The friends you visited obviously gave you their gift on the spot so you also have a bag full of stuff equal to the bag you gave away.

You try and hide it from the children as much as possible, throw some away while they're not looking (feeling guilty for wasting food as if gummy snakes are food - LOL), ration it, put quite a lot inside your own stomach (in order to save your children's teeth you understand).... and then  you just give up. "Have what you like. Once it's gone it's gone."

Every year I say I'm going to do healthy Mishloah Manot next year. The traditional custom was to give real food and some people do this. When you get a real dish (a small lasagne, a little quiche, or homemade bread and cheese) it is so appreciated. One friend made granola and gave little boxes of it with a fresh pear. That was my personal favourite this year. I'm thinking little potato kugels next year.