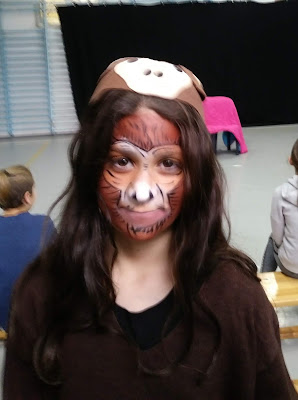 The weather and DD's school play are my reasons 2B cheerful this week. The linky is still with Becky on Lakes Single Mum as we see out the month of March.

1
School Play
DD was a monkey in her school play. She told me, "I only have two lines but I exaggerate them. She was great!

The play was a joint project with students from Nissan Nativ - a film and drama school in Jerusalem (like Rada). Kobi Marimi, our Eurovision entrant, went there. Unfortunately he has graduated and had nothing to do with DD's school play.

2
The Red Lines
We've had the rainiest winter following a five year drought. Not no rain, but very little and not in the north, in areas that feed The Kinneret (Sea of Galilee - not a sea at all but rather a largish lake, smaller than Lake Geneva for example). When we went there in the summer it was a good walk down to the water, over what had once been the rocky sea bed. It was very sad. And two islands have appeared where once there were no islands. However, this year the lake has filled up to above the Lower Red Line for the first time in two years.

There are two red lines. The Upper Red Line, set at 208.8 m below sea level, is full capacity and they open the Deganya Dam to send the excess down the Jordan River to the Dead Sea (also not a sea and now two distinct lakes :( ). The last time they did this was in 2013 following spring flooding and a need to replenish the Jordan River. This is something I would love to see again but it won't be this year.

The Lower Red Line is the point at which they are supposed to stop pumping water as any lower causes ecological damage and the water quality deteriorates. There is 4.2 metres between the two lines and we are only at about 1 metre above the Lower Red Line.

We need to be a good two meters above the Lower Red Line in order to stay above it for the duration of the summer as 1 cm per day can evaporate in the hot weather. Apparently there's still lots of snow on Mt Hermon to melt and, amazingly, it's still raining - with another storm expected this week! I check on the level daily. I'm a bit nerdy like that.

I have to mention that there is also a Black Line, 1.87 m below the Lower Red Line, which is below the pipes so you couldn't pump even if you wanted to. This is also the historical minimum. When things get this dangerous they plan to pump sea water from the Mediterranean into The Kinneret. But we absolutely don't want to go there again!

There's something exciting about heavy rain in springtime because you know the summer is coming so you don't get depressed thinking that this is the situation for the next three months. I intend to enjoy every minute of what could be the final storm this year.