What A Difference A Year Makes

This time last year I was going out of my mind. DD and I were coming to the end of 21 months of staying at home together, and I was coming to the end of my tether. Truth be told, she was pretty bored too. August last year was horrendous weatherwise - far too hot. Weeks when the temperature never dropped below 35 degrees C. and reached 40 more than once. DD was still a bit dodgy on the stairs, needing help walking down and giving up after one flight up (we live on the third floor, no lift), and she weighed about 10kg. We had no structure, no fixed sleeping times, no fixed mealtimes. DD was too young to play on her own. I ate my way through the month whilst the television droned on in the background to keep me company - and to remind me what a proper person looks like and how one should function.

We were going to go to England this summer to escape the heat but then my sister announced that she and her family would be away for most of August. Well there is no point in spending all that money on air tickets when DD's cousins won't even be there to babysit  play with. So we stayed put and I was dreading it. More than dreading it, I was really quite anxious. 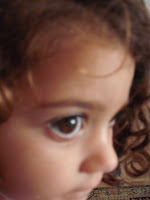 What a difference a year makes. We've had a great August. And although I am more than ready for nursery to start on Thursday (clue: yesterday afternoon DD had a Cornetto for tea while we were out, followed by a yogurt and crisps for supper) I am also amazed and relieved. Here are some of the gifts of August 2011.

1. DD finished nursery for the holidays on August 8th, which meant that we came in fresh. There were only three weeks to fill and my mother was here for the first few days. After a few more days we went for our holiday on the kibbutz. When we came back there were only 10 days left. Well you can't have a melt-down over 10 days with your toddler, that would be pathetic.

2. We have more of a network of friends and support this year. After a year of Nursery we know more mothers and children with whom to hang out. And, since I joined fb in January, we were able to be part of the group: Help I'm a mum in Israel in August -- Let's Plan Something. This ended up being a group of about 40 mums in Jerusalem who are all at least friends of friends. It was the little things like picnic lunch in the park by the waterfalls and canals, a ride along the old train-track park on our bimbas (ride-on toys), and going on the new trams to get an ice-cream, that were winners.

3. No nappies! I had my head in the sand as far as toilet training was concerned. I knew it had to be done, probably, this summer, but I was in denial. Then, one day in July, DD came home from nursery, took off her nappy and announced, "no nappy, knickers." That was it. She wouldn't even wear a nappy to go to bed that night. There were a few accidents during the first week and the first weekend she wasn't remotely interested in using the facilities for number twos. However, basically, that was it - we were done. (Note to self: try to figure out where that anticipated 30 pound saving/month went to.)

4. Remember how I wrote about when DD traumatised an experienced babysitter with her hysterical tantrum? Well, this morning I had a job interview and DD spent a couple of hours with my friend's parents who live near us. She knows them well as we go for tea once a week but she has never been left there on her own. We talked about it beforehand. She repeated the drill: Mummy go out and DD stay with Cecil and Susie - no cry. She helped pack her little bag with a few toys, a book, a dvd, and spare shorts and knickers. She chose a yogurt, a snack, and a plastic cup to take with for breakfast. And she stayed - no cry. A new era has dawned.

5. We no longer take the buggy everywhere which means we can hop on and off buses. DD can stand and wait for me to pay, put on my sunglasses, or whatever, without running off into the road. Our world has expanded to farther than walking distance. And she runs up and down the stairs to get there first.

6. August wasn't that hot this year. 32 degrees was a hot day, 30 was the norm, and many days stayed between 28 and 30. We even had cloudy days and plenty of breeze throughout. Thank you God.

7. My toddler has grown into a little girl. She talks to me and she's good company. She gives a running commentary on her dvds. She's funny. Even better, she can understand, reason, and follow simple instructions. We negotiate :).

8. We have a bedtime routine which takes about 10 minutes. Into bed, story, and then Mummy goes to work (or watch tv, but we call it work) while DD plays with her teddies in bed, listens to her nursery rhyme music and, eventually, falls asleep.

Email ThisBlogThis!Share to TwitterShare to FacebookShare to Pinterest
Labels: motherhood