Why I Hate The Derech Bet Lechem Street Fair 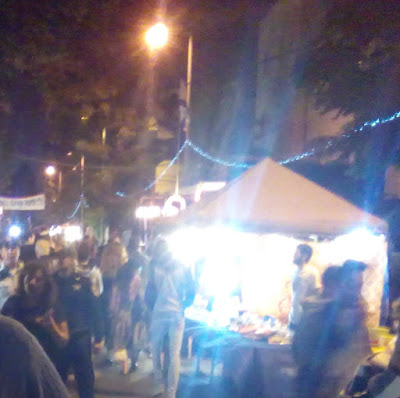 Last night we went to the annual street fair that happens two blocks from our house. They close the road and rent out tables to merchandisers - mostly food and cottage industry crafts. Then everyone comes because there's nothing else to do and it's "free". However the idea of it, from the organiser's point of view, is to get you to spend as much money as possible. The idea of it from my point of view is not to spend any money at all.

As we approached I could see that the road was packed. I told DD that we'd mosey all the way up to the end, then we'd mosey all the way back, and then we'd go home. "What's mosey?"
"It's walking very slowly and seeing everything along the way. Let's see if we can meet more than 10 people we know," I suggested to make it a bit more fun. We met about 20 people we knew before we even got to the entrance barrier.

I dragged DD along to the waffle bar. "Hey! This isn't moseying. I wanted to see something over there. Why are we running?"
"Were going to meet my friend."
"Oh no! And then you're probably going to want to stop for a conversation. Correct?"
"We'll talk and mosey at the same time."

It was lovely to see my friend and her husband. We moseyed a bit together and chatted. DD saw a 2 nis key chain with a tin koala and wanted to buy it for 15 nis. I told her we should see everything and if she still wants it we can get it on the way back. She was disappointed and there may have been some whining involved and the tiniest hint of an argument.

Suddenly we saw DD's best friend standing at the side of the road sobbing. We stopped to learn that they'd lost her three year old brother and her father was running around frantically trying to find him. I spotted him and he was indeed frantic. DD's friend was distraught. I apologised to my friends but we had to help look for the boy.

We were just before a dense crowd watching a band playing. It was almost impossible to get past but we pushed our way through and hurried right up to the end of the road and the exit barrier. The music stopped and they made an announcement about the missing child. I gave his photo to a policewoman who shared it on the police whatsapp (or whatever they use). Meanwhile the father had found him holding hands with another policewoman at another barrier.

DD wanted to go back and see that her friend was ok. So we ran back to the concert crowd and DD pushed through, dragging me behind her. A lady tapped me on the shoulder and said, "we're following in your footsteps."
"You'd better hold hands then." I gave her my free hand and we pushed on. I noticed that she had another four people behind her all holding hands. We were a train of seven with DD in the lead. Eventually we made it out the other end and were all able to uncouple.

DD's friend had gone home. I think her father probably needed a stiff drink. I offered DD something to eat. There were 9 mini doughnuts for 20 nis (4 pounds something) - we only wanted one. Or there were thin crepes with a shmeer of Nutella also for 20 nis. I said we'd eat at home. The koala key ring had been sold.

DD lost it and I don't blame her. We'd been out less than an hour. We'd run up and down the road hardly stopping to look at anything. She didn't get anything. Her legs hurt. She was fed up and so was I. I said we could stop at the 24/7 grocery on the way home and she could buy whatever she wanted. "Can I buy Fanta?" I bit my tongue and said, "just this once." And then obviously I had to buy some food for myself that I didn't need to eat.

We spent 60 nis at the 24/7. Grrrr. I should have just bought the doughnuts. Then we came home armed with a load of junk food and I had to spend the rest of the evening playing Rat-a-tat Cat to make up for everything.

(I just want to add that in previous years the fair has been much much better with loads more street entertainment, lots more participatory art, and many more stands with real artists selling real art.)