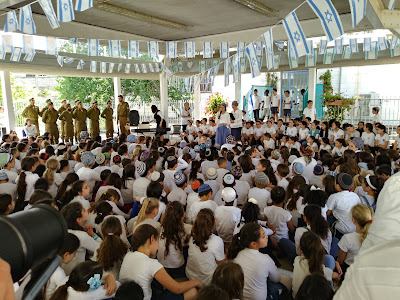 Last night the siren wailed and DD and I rushed out onto the balcony to stand in silence. There were a couple of cars stopped in the middle of the road with the drivers standing next to them, a few pedestrians stopped mid-step and a number of neighbours also on their balconies. The country stood still and so began Memorial Day for Israel's fallen soldiers and victims of terror.

All shops were shut. Many people were at ceremonies and services last night. Today was a half-day in school and every school had it's own ceremony. There are no lessons, but rather a whole morning of activities about the day. I got a whatsApp last night telling me that I was to help Idit in 2nd Grade for the first three hours and then be with Nechama's 5th Grade boys for the last hour. No problem.

As we left the house I noticed another WhatsApp. I decided not to waste valuable time reading it at that moment -I'd read it on the bus. It said that Idit didn't need me so I could come in later but I must be there for Nechama at 11.15. Okey-Dokey, too late. 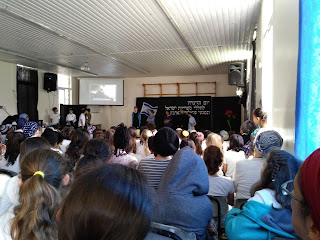 I went into the gym to see the 6th Grade boys' Memorial Presentation. They told the lives of different fallen soldiers. They acted out parts and showed interviews with their families.

One boy who spends quite a lot of time during my lessons driving me crazy, took the part of Adam Weiler, who was honoured this year by the Government along with his brother Gideon Weiler. Whilst taking his exams at Sussex University in 1967, Adam heard that war had broken out in Israel. He abandoned his exams and rushed to Heathrow Airport where he was told that no one was flying to Israel until further notice. He saw an ElAl plane on the tarmac and ran past the security guards to board the plane. Adam survived the Six Day War but was killed in action three years later. His younger brother Gideon fell in the Yom Kippur War in 1973.

It was very moving to watch my student pushing the security guards out the way and running to get on the plane. I suddenly had a surge of respect for this boy as I forgot, for one moment, that he was only playing the part in a presentation. And then I remembered that this 12 year old boy will be serving in the army in just six years time and doing whatever he has to do to keep me and DD safe. Israel's Memorial Day messes with your mind.

We had a group of soldiers join us for the ceremony after the presentation. Mt. Herzl, the military cemetery, is near our school. These soldiers were part of a platoon who had lost brothers in arms and were visiting the graves together, along with the families of the fallen soldiers. However, these particular soldiers are all Cohens. The Cohens are direct descendants through the male line, of the priests who served in the Temple until it was destroyed in 70 CE. They are forbidden from coming into contact with dead bodies so they don't enter cemeteries - ever. Despite this, they wanted to be at a ceremony. Their Commanding Officer happens to be Idit's son so he brought them to our ceremony, and they also watched the 6th Grade presentation before it.

It added something very special to have the soldiers in uniform at our ceremony. It felt like a real honour that they wanted to be with us. And it was great for the children to see them standing still and serious and only moving when their CO gave them permission to be at ease. I noticed that the whole school was better behaved than usual. We asked them to participate by reading a couple of the prayers.

Then the 11 O'clock siren sounded and we all stood in silence again. We lowered the flag to half-mast and sang Hatikva. We sang the school song (Soar, soar to great heights, you can soar, you have wings to carry you on the wind, don't be afraid, don't hold back, soar to great heights, you can soar) and a song to God for the safety of all our soldiers (God who blessed our fathers, please bless our soldiers, protect them and bring them home to us, safe and sound, please God bring them home).

I went into Nechama at 11.15 but she told me she only needed me for the last five minutes as she had to go early. I returned to the teachers' room where the teacher who sometimes gives me a ride home (a 10 minute ride instead of a 40 minute ride on the bus after waiting x minutes for the bus to arrive) was just leaving. I explained that despite having no duties all day, I had to stay to be with Nechama's class for the last five minutes of the day.

Tonight and tomorrow we celebrate Independence Day. We are celebrating in a big way this year so I'll be offline until after the weekend. Happy Birthday Israel, 70 Years!