The Bible - A Chapter A Day 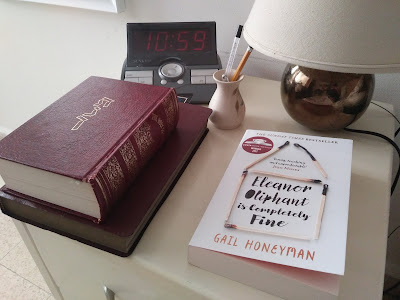 Whilst in London for Passover, I bought myself a Bible. This is what I wrote about it here.

The BibleOf course I know the stories from the Old Testament and some others that I've heard second-hand through teachers and discussions around the dinner table. But I've never actually read the Bible - the whole thing. Thirty years ago Rabbi Donniel Hartman told a group of us that he realized this too, one year, and he read the whole thing from cover to cover.I decided to do the same - a chapter each week corresponding to the portion we read in the synagogue each week. I started with the beginning of Genesis every year for about 10 years and never got further than Joseph going down to Egypt. Part of the problem was my Bible which had both Hebrew and English in the tiniest print and the most old fashioned language.So I bought a Bible. With big print. And if I'm already buying the Old Testament, I should really read the NT as well. My mother and I both said how we regretted skipping Scripture lessons at school just because we had a 'Jewish' pass. (There's a lot I regret about my education but that's a whole other discussion.)

Well I'd not got round to starting yet when I heard about the 929 project. This is the second time they're doing this. Here's some background to the first time around. Basically, in November 2014 they started an online project to read all 929 chapters of the Bible, Prophets and Writings, from Genesis to the end of Chronicles 11. So that's pretty much everything except the New Testament - as it's a Jewish initiative.

If you read a chapter a day for five days a week, not counting holy days and festivals, and have the weekends to catch up if that's more your style, the whole thing takes almost three years. They had over quarter of a million people sign up to the website and commit to reading along. This was then, I didn't know about it, and anyway it was all in Hebrew.

However, two weeks ago they started again and this time there is also an English website. If you follow the link you can see that today we are on Genesis Chapter 12 - where god tells Abraham to leave his family and go to an as yet unknown destination. (Is this the Bible's idea of suspense?).  The English website, like the Hebrew one, has articles, commentaries and maps to help you if you really want to study as you go along. A friend of mine has set up a small facebook group of friends where we share thoughts. There is probably also an official facebook group but I've not looked for it. It's not too late to join in and you don't have to be Jewish.

So this time I'm really reading the whole Bible. This time they are scheduled to finish on 2/2/22 or 22/2/22 - one of those memorable (ha!) dates. I'm so holy that I have two Bibles on the go. The bigger book is the whole thing including the NT in bigger print and a slightly more modern translation. The smaller, but thicker, book is only the OT parts but with the original Hebrew on the facing pages. Sometimes if something is ambiguous, I read the Hebrew to try to get to the bottom of it.  Of course I'll have to tackle the NT on my own (and only in English as I don't read Ancient Greek) but I don't have to think about that until 2022!