State Of The Fed Up Nation 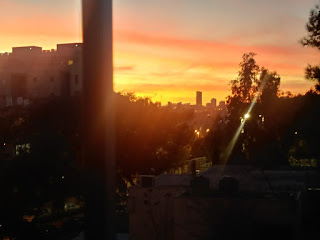 I've not blogged much for a couple of months because I didn't feel like it. We don't go anywhere and it's been over 30 deg C for the whole summer and the mercury's still up there. On the one hand, we're fed up at home (fed up in every sense of the words) but on the other hand, I'm thankful that I've not had to go out to work or anywhere in this heat.

Israel is entering its second lockdown starting tomorrow at 2 pm, the eve of Rosh Hashana - the Jewish New Year. We got the rules a few days ago and they were vague enough that, as someone wrote on fb, you can't leave your house unless you need to go somewhere.

The one clear directive was that we're not allowed farther than 500 m from our places of residence - except to go to work, shop for essentials, health care, exercise, to assist someone in distress, and various other caveats to do with prayers, children and special needs.

Fine. We have friends who live very close by as do many people. So we all arranged our two-day festival with meals together in each other's homes - not exceeding 10 people at any one meal. Then today - 24 hours before the lockdown, after we'd shopped, after many people have already cooked, after all arrangements have been confirmed, they clarified that we are not allowed to visit other homes (although we are allowed to meet in the local park),

Meanwhile there are thousands of ultra-orthodox men trapped in no man's land between Belarus and Ukraine because they thought God would open the border for them when Ukraine made it very clear that they are closed to tourists until the end of September. It's an annual pilgrimage to the grave in Uman of Rabbi Nachman of Bratslav. Basically it's a rave party for men and they won't give it up. And their rabbis told them not to give it up because these ultra-orthodox rabbis are power mad and won't be told anything by a secular government, secular doctors and, God forbid, scientists. It hurts because, as one of the leaders of the opposition, Yair Lapid said, we have all had to give up on our personal "Umans" this year.

These hassidim, including lots of male children, are sleeping rough in the cold and relying on the red cross for food. Israel is telling them to return to Minsk where there are planes ready to bring them home but it'd be a shame if they left and then God sent a miracle - right? Did I mention that traveling on Rosh Hashana is forbidden (Like on Shabbat) so if they don't leave now they will be stuck there until Sunday night.

The ultra-orthodox are a law unto themselves - they do what they like and bugger the rest of us. Two mayors of ultra-orthodox towns are among those waiting for the Ukrainian border guards to be touched by God. You couldn't make it up.

So while I'm bashing these hassidim, others are blaming everything on Bibi Netanyahu. They're not wrong. He has put himself and his interests before that of ordinary citizens at every opportunity. But others love him because ...... they have reasons and I'm not going into all the politics now. However, the hatred on and off of facebook is astonishing.

The Bibi bashers throw vitriol at Bibi and the religious respond with disgust that political demonstrations are permitted with thousands of demonstrators while the rest of us point fingers at their massive weddings and overcrowded prayer services and study halls. They're not wrong either - I also don't understand why demonstrations are allowed.

It's all political. Bibi cannot alienate his religious supporters by banning all religious gatherings, and democracy must be seen to be sacred, hence the demonstrations. Meanwhile the Yeshivas (religious colleges) are open while schools are shut. Ultra-orthodox men travel to Belarus to visit the grave of a man who died in 1810 while we (like many others) can't visit my mother who is very much alive.

I don't even know if a lockdown is effective or not. There are heated arguments on both sides. The only truth is that no one's opinion is totally subjective. 25% of the country are currently unemployed. If I had lost my own business that paid the rent on my family home or was in danger of losing the home that took me decades to buy, and I had more children to feed, etc.. etc.. I'd also be shouting about the unnecessary lockdown.

But I wore my mask properly when supermarket shopping today while many didn't bother. My motives are not political. I'm scared of getting corona and I don't want to have to pay a 500 shekel fine if I'm caught. For these reasons I tend to follow the rules.

I canceled our plans for the holiday weekend. Others are sticking a finger up to that and going ahead. I don't blame them and I won't judge. Everyone's situation is different. I'm an older, overweight, single mother and so I will err on the side of caution.

So as we go into the New Year in a state of mud-slinging, blame naming, anger and hatred towards each other, I wish everyone a happy new year in lower caps.