Salatim: Aubergine And Others

Salatim is Israeli cuisine's answer to tapas or antepasta. You serve a selection of Middle-Eastern dips and small salads with pita and olives for an interesting hors d'ouvres. Add some stuffed vine leaves, a big salad and some cheese et voila - lunch for a summer's day.


I usually have a mammoth cooking fest on a Thursday night because it suits me to have a full fridge for the weekend and leftovers for as long as they last. Most salatim will last the week in the fridge if necessary, but it never happens. I eat them as dips with crackers or crispy things, spread on toast, as dressings for salads, or sauces for pasta.


The most ubiquitous salatim are humus and tehina. For Salat Tehina, just take the humus recipe and add more tehini paste instead of chickpeas. It makes a lighter, more runny sort of dip with a distinct sesame taste.

The next most popular ingredient for salatim is aubergine:
Salat Aubergine (also known as Baba Ganoush)

Prick an aubergine and place it in a hot oven until the peel is crisp and cracked. Cut it in half and scoop out the flesh into a sieve. When it is drained put all the ingredients into a food processor and mix to a loose paste. NB: start with small amounts of the seasonings and add to taste.

A variation is to mix the aubergine with mayonaise instead of lemon juice - for a creamier salat. 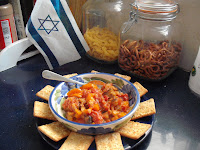 Saute the aubergine and garlic in a pan. Add all the other ingredients and simmer until most of the liquid has been absorbed. Leave to cool. Many people add tomato puree for a deeper red appearance but I'm on a back-to-basics quest so I try to eliminate things in packaging.

And here's one for free as we've practically made it already:
Moroccan Carrot Salad

Par-boil slices of carrot. Saute chopped garlic in a pan. Add the carrots, lemon juice, ground cumin and coriander, salt and pepper. Simmer until the carrots are soft and any liquid has been absorbed. Serve cool.

This post is linked to the Saturday Recipe Swap at LakesSingleMum. The theme this week is summer dishes for picnics and BBQs. Check it out.

I've also linked to Recipeshed's Salad Week. Loads of interesting and unusual salads so pop over and take a look.
Posted by Midlife Singlemum at 7/30/2011 01:35:00 PM

Email ThisBlogThis!Share to TwitterShare to FacebookShare to Pinterest
Labels: life in Israel, Recipes