This was the picture that all the fuss was about. This was the picture that got me a lecture from my Feng Shui/Chinese Medicine friend about ruining my chances of ever getting married. This picture was the reason I bought this picture of perfect coupledom in order to strike a balance. However, my friend was adamant that the Girl With Lemons had to go if I were to make room for a man in my home. Quite frankly, I think I made the better choice ;)

Girl With Lemons is part of the Israel Museum Collection and what I have framed is a poster from the museum shop. I fell in love with this painting because of the colours, the setting and the girl herself. Maybe for the same reason that Mummy Plum chose this picture. Or I may be flattering myself. I knew that this was going to hang in my kitchen when I moved apartments and I even chose the colours of the kitchen around it. See... 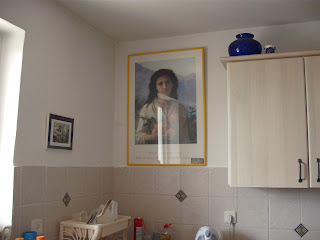 Well you can't design a kitchen around someone and then chuck them out, can you?

I saw Girl With Lemons once in The Broadwalk Shopping Centre in Edgware while I was visiting family. She didn't have her lemons and in fact she was about nine years old as opposed to the older teenager on my wall. But it was the same girl by the same artist. I wanted to buy the print (small poster?) of her younger self but the stall holder had it framed in a fancy gilt surround and wanted 40 pounds for it. So I left her in Edgware.

I did some research (google) and found that W. Bouguereau (1825 - 1905, French) spent his life painting my girl - you can see loads of her here. He was married twice and had five children. As he painted this girl from when she was a child, I was hoping she was one of his daughters. But it seems she was a model he hired to pose for him.

P.S. did you notice the small picture tucked into the frame at the bottom R-H corner? I was so freaked out by my friend's lecture at the time that I cut up a catalogue from the Metropolitan Museum of Modern Art, NYC, and placed little copies of paintings depicting couples and families wherever I could find places. When I was going through IVF I placed mothers and daughters everywhere. There is one other one left tucked into the sockets in my bedroom. And I'm so not superstitious - I don't know what came over me. 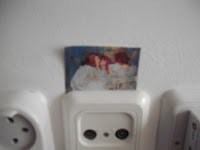