Keith the Reluctant Housedad (aka Big Chief Recipe Shed) took up my challenge to make a lemony vegetarian dish that isn't dessert. He came up with Lemony Middle Eastern Roast Vegetables with Zatar served on (so tempted to write: a bed of...) Fluffy Couscous and Feta Cheese. It looks amazing. I was especially intrigued by the cubes of lemon with the peel that get roasted with the vegetables. Of course I promised to cook it myself and blog about it...

Now what would be the point of reproducing exactly Keith's recipe and writing an almost identical post? Exactly. So I've made a few modifications....

1. Instead of butternut squash, I substituted aubergine. I love roast aubergine and it's still very Middle Eastern.

3. I forgot to buy a green pepper so I just have the red pepper and courgettes (mine are the light green ones rather than the dark ones that Keith used) to go with my aubergine and garlic.

4. I can't put feta cheese in my couscous because I'm doing a DIY-Detox with Jane from Diary Of a Desperate Exmoor Woman. I've cut out dairy completely so no cheese sorry.

5. We're not big on couscous although the couscous with feta sounds amazing. Seeing as I'm not doing the feta and I'm also trying to feed a 3yo I used coucous ptitim intsead. 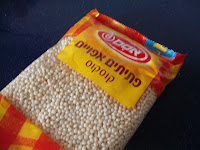 In the early days of the State of Israel in the 1950s, there were many refugees from Arab countries. They weren't used to the pasta and potatoes familiar to the Europeans. They cooked with couscous, lentils and rice. A cheap oven-baked pasta was created in the shapes of rice (like orzo), lentils, couscous, and the giant pearl couscous (maftoul or mograbeih). You cook it like rice or pasta. They are now a favourite Israeli food and come in rings, stars and hearts as well. Follow the links for a fuller account on Wikipedia.

So here it is:

For the marinade: Olive oil, lemon juice, zatar (if you can't find zatar cumin is also good and still Middle Eastern). I added salt and pepper though Keith didn't.

Cube the vegetables: aubergine, courgettes, red pepper, garlic (throw in whole cloves with the peel still on). I left out the whole cubed lemon as this was my second attempt. The one I made yesterday I found too lemony. Keith, however says he likes the sharpness so it's a matter of taste. I prefer a subtle hint of lemon.

Mix the marinade into the vegetables and leave to marinate for at least an hour.

Roast the vegetables in the oven for about an hour turning them over occasionally. (Yesterday I added black olives after about 45 minutes and it was a nice touch. Today I didn't have any.)

Squeeze the garlic cloves out of their peels and squash each one lightly with a fork to release the flavour.

Serve the roast vegetables on a bed of  (just kidding) with ptitim. 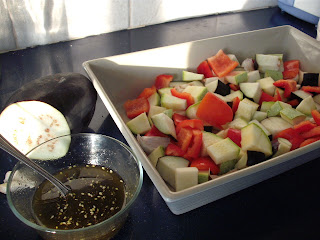 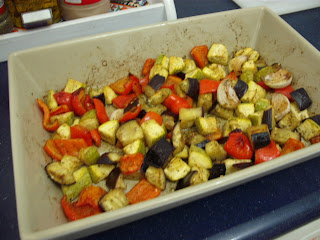 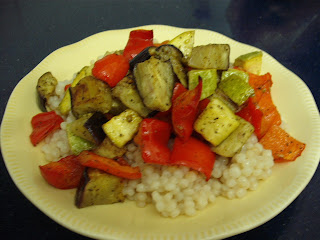 When I packed the leftovers away I mixed everything together and it actually looks like a very nice side dish to serve with fish or chicken. 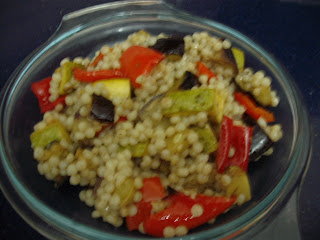