From Sorrow To Celebration - 65 Years!

As Memorial Day segues into Independence Day we try to lighten to mood and move forward. It's fitting that the day before we rejoice, we remember those who have died to make it possible for Israel to be celebrating 65 years.

Last year on the morning of Memorial Day I took DD to a ceremony at the school I used to teach. All the schools do this. They start with the 11 o'clock siren and commemorate the fallen soldiers and victims of terror. Then they start the uplifting music, marching, dancing, flags, gymnastics, singing, and rejoicing for Independence Day.

This was last year. I didn't say much but took a bunch a of pictures. This year DD was going to the ceremony at the school connected to her kindergarten. The whole kindergarten went together. I stood on my balcony for the minute of silence and the siren.

Opposite us is another nursery, not connected to a school. These children are also 4 years old but were not doing the ceremony thing. As I waited for the siren I watched them playing on the slide and other outdoor apparatus. Laughing and squealing, running and climbing. I wondered what would happen when the siren went off.

Suddenly it started. It's very loud. You can't ignore it. The cars in the street came to a standstill and the drivers got out to stand silently for the duration. The teacher from across the road shouted, "Come children, stand still!" Every child stopped playing instantly, stood where they were, straight and silent, without moving for the full minute. I took a quick photo - notice how everyone is wearing blue and white today. When it was over the teacher announced, "Well done! Now we go into Independence Day with happiness!" And they all went back to their toys. 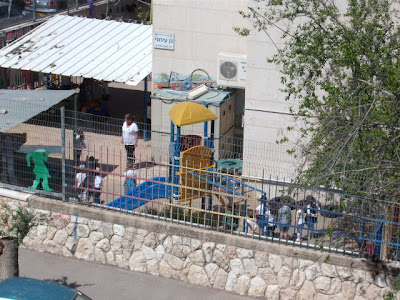 I was amazed and proud.

I arrived at the school to collect DD just in time for the final dance of the ceremony. Then all the children stood up to sing Hatikva. DD doesn't know the words yet but I was overwhelmed (again) with pride to see my 4 year old daughter 'singing' Hatikva in a ceremony for Israel Memorial Day - Independence Day. It took me back to all those Zionist summer camps where we ran around a field in The Wye Valley or South Wales capturing the Israeli Flag and singing Israeli songs around the campfire. This is what it was all for.

And for the whole afternoon DD marched round the flat chanting: YIS YIS YISRAEL, ECH ANACHNU OHAVIM ET ERETZ YISRAEL. (Is Is Israel, Oh how we all love the Land Of Israel). At one point I asked her not to stomp so much as it might disturb the downstairs neighbours. Her reply - "I'm not stomping, I'm marching!" Oh well, I think they are Zionists downstairs too so they'll understand just for today.
Posted by Rachel Selby at 4/16/2013 12:00:00 AM