Notes From The Back

I'm nowhere near the front so here are some notes from the back...

1. Last night at about 10pm the air raid siren went off in Jerusalem. I grabbed a sleeping DD and my door keys and we ran down three flights of stairs to the communal bomb shelter. We didn't stop for shoes or dressing gowns but the neighbours were similarly undressed so we just laughed and bonded. We heard the booms, waited the 10 minutes, returned home, and got on facebook (obviously).

2. Whilst downstairs, one of the neighbours started arranging the chairs and talking about bringing down boxes of bottled water and food. So I guess we have a house-mother. :)

3. I don't have tv but my friend told me that they were broadcasting children's programmes at 10.30pm.

4. I went to sleep wondering whether to bother getting up if there were a siren in the middle of the night. I know that some friends with more than one sleeping child couldn't manage it. You only get 90 seconds to find cover in Jerusalem. On the other hand, they say the stairwell is safer than nothing. DD and I are sleeping in a back bedroom with a very small window that is unexposed (faces another wall). And the outside wall is on the east side of the building i.e. the opposite side to Gaza. I left the window open as there is less pressure to implode the window if' it's open. 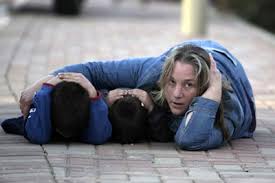 5. This morning I made sure DD knew what to do if there is siren while she is at day-camp. She does - run to the reinforced room. I also told her that if we hear the siren outside she has to get on the floor and curl up into a ball and I have to lie on top of her.

6. Came downstairs to find all the bikes, buggies and other junk have been moved out of the bomb shelter. I put DD's bike in our storage room for the duration. At school all the shelters had been opened. I received an email from my college saying where all the shelters and reinforced areas are. If you are in the classroom block you are advised to go down to the basement and lie on the floor with your arms over your head.

7.  Diet's out the window. Last night I attacked and demolished DD's crisps. Friends on fb and twitter have reported raiding the chocolate supplies. It seems 9 out of 10 people head for the fridge on returning from the bomb shelters. Hamas has a lot to answer for.