On our way home yesterday we saw this placed on the shelf next to the door to our lobby. DD and her friend made me take a photo of it as it was so lovely. I said we should make some but we probably won't. 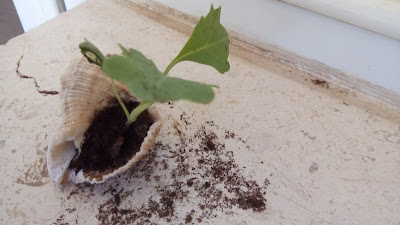 The college course that I tried to close a few weeks ago, of course has been re-opened. I even opened it voluntarily, after some of the students went to the top and complained bitterly. In fairness, 'the top' backed me up and only asked me very nicely if I might reconsider for select students. I had to admit to myself that I'd rather the students who'd almost finished just finished rather than have them back next year to do the whole thing again. As there's no point giving them extra time (again) unless they can use it, I've given them until after Hanuka to finish. And then I'm really really definitely and finally closing the Summer Course! We'll see. On the flip side, those students love me now. *sigh*

My friend Stephanie has a great attitude to money. 'Money comes and money goes.' There was a delay (no one's fault) in paying me the full remuneration for the Summer Course and I'm finally getting the last installment at the end of this month. I had earmarked that money for a year of Building Committee dues, the yearly payment to DD's school, and possibly my new dining table. Then DD ate a large chunk of it by needing two crowns on her teeth. Pun intended. *sighs again*

About the crowns on DDs teeth. I take full responsibility. Over the years we've had too much sugar and not enough supervised brushing. We don't have flouride added to the water here so the flouride comes only from the toothpaste. We have been lax. Another problem is that when you open a bag of sweets for an only child - all the sweets are for her. I try put a few sweets in a bowl and the rest away for another day but that's much harder to impose than when you divide the bag between a number of children and the sweets are gone. I've fallen into the defeatest attitude of, 'when it's gone its gone.' Not anymore though. After two crowns and a significant amount of money we are brushing for Europe and restricting sugary foods considerably. Luckily we get a second chance as we've only messed up with the milk teeth.

I need to clear our balcony and plant some winter greenery. Maybe we will make some shell plants after all. 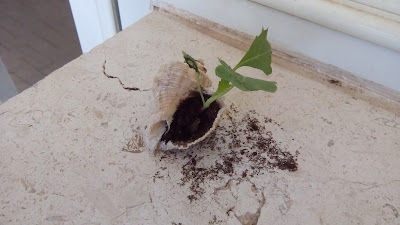