1. Doing Nothing
Have you noticed that this blog has become a once a week wonder over the past few weeks? Yeah me too. We had the final week of school followed by my final week of college and finally, last week we had..... nothing. It's a funny thing about having nothing to do. Like some sort of self fulfilling prophecy, if you've nothing that you have to do you often do nothing. You'd think the week would have been spent catching up with all sorts of things on the back burner. But no, nothing.

2. There's always one
On the way to the pool this week we noticed that the road in front of the local community centre and library had been re-tarmacked. And further along the road we noticed this. :~) 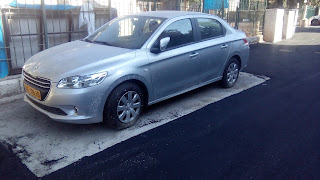 When they did our road there were also a couple of cars that had not been moved. The police came and they did a supervised 'break-in' and rolled the cars to the other side of the street. I remember thinking how easy it was for them to open a locked car door. On the other hand, it's not possible to hot-wire a car like it was in the old days.

3. Pocket Money: Lost and Found
DD has entered that obsessed by money phase that young children all seem to go through. One day last month she came and sat down to start a serious conversation with me. "Mummy I need to get more money. How can I get more money? And I don't mean wait until I grow up and go to work." I told her she could earn money by watering the plants on the balcony but as I've not got round to planting any yet, that was not an acceptable solution. So we agreed on pocket money once a week.

I used to give her any stray 10 agarot pieces (about 2p each) we found or that I had in my purse. She collected 80 of them. "Mummy, I've got 80!" she exclaimed. The look on her face when I told her that she could buy one fancy ice-lolly or two cheap ones with that amount, was priceless. And a little sad. So I agreed that she should get 10nis (10 shekels = 2 pounds atm) a week pocket money. It seems a lot more in pounds than it does in shekels but things cost more here and I'm hoping it will be saved up to buy something worthwhile.

Yesterday afternoon DD suddenly exclaimed from her bedroom, "Mummy, I've found my money! It was in my bead box! I put it there to keep it safe!" I happily gave her her pocket money for this week. So now she has 38nis.

I started a conversation about what she could buy with it. However, I can see that she doesn't want to spend it. ("You can buy me that with your money, Mummy.") She likes having it too much. Don't we all. And me, I'm enjoying watching the process of character building as DD negotiates her way out of babyhood and into the real world.


I'm linking up with Reasons 2B Cheerful over at Becky's on Lakes Single Mum.