The New Outside Room - Reasons 2B Cheerful 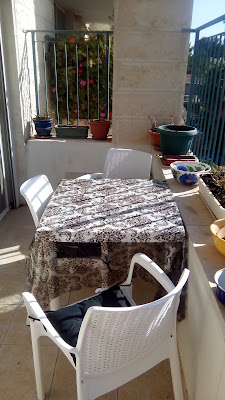 I bought the new balcony furniture. You can see below what it looked like before. I had some plastic chairs which aren't comfortable, and a small coffee table which does what it says on the box - holds your coffee - but not much else. The truth is that we didn't really use the balcony except for hanging washing. And that was a shame.

We went to ACE where they had run out of the 'bistro' sets that I thought I wanted. So we we went to Home Center where the 'bistro' chairs were 250 nis a chair (about 50 GBP) if you buy four but more if you only want two or three. In the end I decided to buy the nicer Keter (the plastics people) chairs which are still much cheaper than aluminium framed chairs. And if you're already buying Keter, it's better to go to the Keter shop for the best value.

At keter I chose a cheap but sturdy table and four of the nicer, more comfortable chairs (one is at my desk). The table is bigger than the 'bistro' tables so we can really have a meal out there and/or play Rummikub, paint pictures, etc....

On the way home we stopped at Hastock (a bazaar outlet) and picked up four cushions for the chairs and the plastic table cloth. We arrived home 10 minutes before the chairs and table were delivered.

Tonight's dinner is salade sur le balcon. To drink we will have le Chateau Robinet as usual.

The next project is growing something pretty to look at. I said in my last post that I'm tempted to go to the nursery and buy some colourful plants but instead I'm going to try and grow from cuttings and seeds. This may take some time.

Linking up with R2BC which is back at Lakes Single Mum this month.