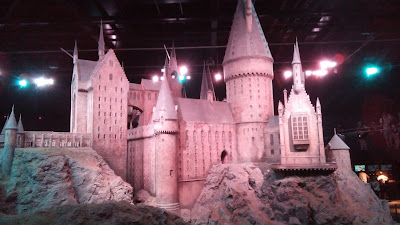 We're ready, we're stoked, we're dueling to kill. It's going to be bloody and people are going to die. It's been brewing for a long time. Some say for as long as 30 years, some say 17, and some say it all started seven years before. For us it's been a thing since last July. Relentless, every day, through exhaustion and all other personal highs and lows. We never lost faith, we never gave up, we never stopped believing. And now we have reached the final showdown.

I've been reading Harry Potter to DD every night in bed for seven months. I've read almost seven books out loud at the average rate of 10-15 pages a night. I admit that some nights we read far too much and far too late because we simply had to know what happened next.

We are at the final 130 pages and about to enter the Battle of Hogwarts.

Last night was exhilarating. We were both heady with anticipation as the climax drew near. Without giving too much away in case there is one person in the world who's not read it yet, DD was throwing herself about in excitement as more and more supporters unexpectedly showed up to join the good fight. Old friends from way back stepping up to the plate. The sort of friends we all hope we have in the sort of  the community we all want to belong to.

At times it was frustrating. Like when we just wanted to start getting organized, evacuate the little ones, protect the castle, formulate a plan. Volde.... He Who Must Not Be Named was on his way and would be at the castle gate any minute. With no time to spare Snape suddenly appeared and had to be dealt with, which took almost 2 pages! Ughhhh!

Professor McGonagall, however, was on top form. No one has quite the same dry wit as Minerva McGonagall. I read her in my best Jean Brodie accent (as she was in fact Miss Brodie in a previous incarnation). "We will delay him by protecting the castle [with protection charms]."
Harry: "Is that possible?"
McGonagall: "We teachers are quite good at magic."

DD and I have an added interest in whether Luna (our favourite) is going to marry Dean Thomas or Neville Longbottom (our other favourite). We love it that the former glumf and the flake are now committed, brave and strong leaders.

We rolled around laughing at the thought of Aberforth's face when hundreds of children appear in his living room and have to be disapperated home, each with a qualified, license-holding witch or wizard of course as they are all under age. It's going to be bedlam. We'll probably miss all that fun but I'm sure we'll hear about it afterwards.

And finally as things started to get moving and shaking, with the enemy at the gate, with the level of suspense and excitement at its highest in all the seven months of home-Jackanory...... the chapter ended.

I'm surprised either of us managed to fall asleep after that. But luckily we did as we need all the energy we can muster. Tonight we go into battle.


Pop over to Mummy from the Heart for other Reasons 2B Cheerful.