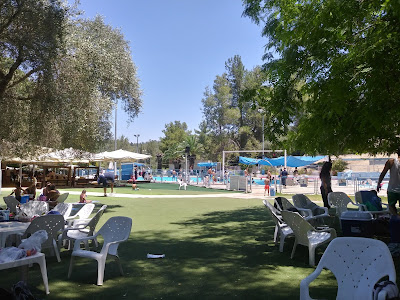 This week's reasons 2B cheerful comes to you from 1976 - 1987, a swimming pool just outside Jerusalem, I was in Seventh Heaven, and we missed the final week of July R2BC linky so this one is with the August linky on Mich's Mummy from the Heart. So traversing time and space, lets go...

On Wednesday we went to the pool at Messilat Tzion, a village just outside Jerusalem. We went with friends who are early risers and movers so we left at 8.30 in the morning. Arriving as the place opens allows you a prime spot near the pool, but not too near. Our children can swim so we want to be able to see them but we don't have to be actually at the poolside. Also, at that time of the morning there are only a few children in the pool and two lifeguards on duty.

We found a shady spot on the grass under a tree and made ourselves at home. Then the music started. Blaring. It could have been a disaster. But as luck would have it they were playing my own personal favourite playlist. A medley of pop from the 1970s and 1980s.

It was all I could do to stop myself getting up and dancing. I did sing out loud though. Every song held a memory for me from 40 years ago.

Summer 1976 - the longest and hottest drought in the UK in my lifetime, so far (I was 14). The grass was yellow, some rural areas had standpipes for water at the end of the streets, washing your car and watering your garden was banned. We sang, "skyrockets in flight, afternoon delight." It's just as good now as it was then.

Summer 1978 the movie Grease came out and my sister and I and the girls next door, sat with our heads almost inside the cassette player singing "You're the one that I want," over and over again until we knew the words by heart.

There was the winter camp 1979, where my friend Mandy and I were the cooks. Ohoh ayay, I love you more than I can say. We changed the next lyric to "and if our food is hard to swallow, oh oh, we'll give you twice as much tomorrow."

Summer 1980, camping in Lanarkshire, Scotland. My baby takes the morning train, he works from 9 till 5 and then, he takes another home again... What they lacked in sophisticated lyrics they made up for with sing-along potential.

Come on Eileen, was the wet weekend in July that I spent with Sharon in Liverpool. It was 1982 and we'd just returned from our gap year on a Kibbutz in Israel.

They just kept on coming. I gazed out across the pool and the palm trees, towards the Jerusalem hills. The scenery and the music carried me back to the summer of 1987 spent in California. La Isla Bonita, and Yeh, I wanna dance with somebody, with somebody who loves me.

The kids (what kids? Oh yes, we had three kids with us) frolicked in the pool. They had ice-creams and later hot dogs and chips for lunch. We left at 2.30 pm just before the heat of the day and the afternoon crowds arrived.

It was the best pool day ever. Except for maybe the pool days back in the real 1970s and 80s.