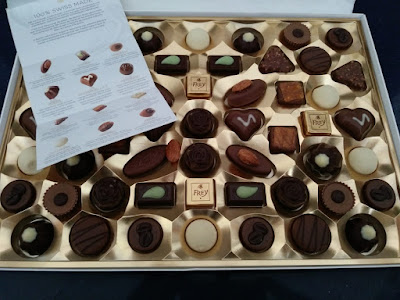 I missed the New Year goals, resolutions, new start stuff this year. This is particularly upsetting as 2020 is a totally satisfying round number and it's also the start of a new decade.

My mother was visiting and we had to have proper meals and food that she likes (toast) for smaller meals, and a biscuit to have with coffee, etc... We also went out to eat at friends and I forgot about the no sugar rule when delicious carrot cake and vanilla ice-cream appeared for dessert at Sally-Ann's house. Then my nephew came so it had to be cheesy pasta for dinner. My mother isn't going to walk up and down mountains so we got taxis at times I would have walked. And of course we had to watch at least four episodes of The Crown every evening (because my mother doesn't have Netflix) so that put paid to anything productive.

The house guests left and we hosted lunch guests, one of whom was visiting from Switzerland. The beautifully wrapped gift gave no indication that it was full of exquisite chocolates so I didn't think to unwrap it and put them out for everyone to share. They're gone now though. 😋

It's lovely to have guests, but it does interfere with one's plans for a frugal, puritan, exemplary lifestyle. And when they left, it was too late. What's 06/01/2020? Nothing special, is the answer.

If I waited until the next significant date: 1st of February, or even 02/02/2020, I'll have put back all the weight I lost last summer and be feeling dumpy and depressed as well as lazy and unproductive. The new Hebrew month of Shvat doesn't even start until Monday week. What's an obsessive about numbers girl to do?

So despite the absence of a starting date, I can still plan. I read an article, I think it was in Psychologies Magazine, that said it takes a decade to really transform one's life. I like that because there's no urgency to start. Hahaha, did you spot my problem there? I actually think there's a lot of sense in this as long as we are blessed to still be around in 10 years time. Fatalistic? Moi?

On a more immediate scale, I just watched a video by ModernHealthMonk (I don't think that's his real name) called: How to Design Your Life. He suggests you sit down and write one thing... what would be the coolest thing to happen this year? It's a gem of a way to pinpoint what you really want. As he says, "there's no point getting to the top of the ladder of success only to find you climbed the wrong ladder." He suggests that you do this three times. I agree, no one likes a single-minded zealot and three goals are manageable.

Then for each goal, you write three daily or weekly habits that will bring you closer to realising the goal. Keep a record. Nine things a day to tick off on a 3x3 grid or however you choose to plot your progress.