Rain Dances:
It suddenly started pouring with rain - really hard proper rain. This is only the second time in the past 7 months. Everyone was out on their balconies clapping and we could hear cheering from across the street. The first rain of the season is called the Yoreh. This isn't the Yoreh as there was a thunder and lightning storm about five weeks ago. Right at the beginning of October! We were psyched for a sorely needed wet winter (we need about 10 wet winters to fill the Sea of Galilee and The Dead Sea). Then nothing since, until tonight. In the time it's taken me to write this paragraph it's all over.


Creative Supplies Management:
Today I watched the builders across the street load a family car with paving stones meant for the new kindergartens and landscaping they are building. It happened in broad daylight and they were in no hurry. I applaud their ingenuity in helping to make sure there's not a surplus of paving stones for the contractor to deal with later. Especially as he can easily order more if their calculations were off. The car then crawled down the street like it'd been hit by a ton of bricks. Oh yes, it had. 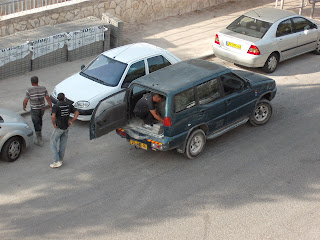 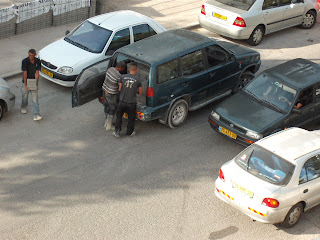 Name Calling:
Today DD came home from kindergarten and told me, "Mummy, today all the friends called me a different name." She couldn't remember what the 'different name' was but she obviously didn't like it. She told me that she'd told the teacher. After that the story falls apart with something about someone being bitten (not her and not by her). I hope this is one of those things that will remain an eternal mystery as I'd prefer no more talk about calling someone a different name.