First I caught some thieves, then I had breakfast, then I went to work.

Following on from yesterdays story about the alleged theft of paving stones from DD's new kindergarten opposite, would you believe that I woke up this morning and saw this from my balcony? 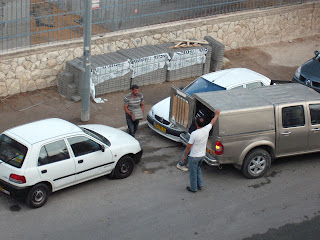 However, this car seemed to have a flat tyre (back right). No worries, it wasn't long before the old blue hatch-back turned up. You'll remember him from yesterday. At this point somebody (I'm not saying who) called the police. The guys were just emptying the blue car in order to transfer the booty when the police arrived and caught them red handed. 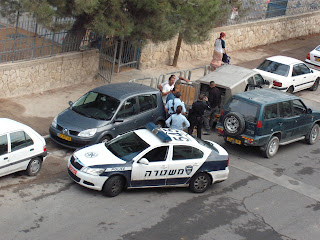 It was now getting late and I had to go and get dressed. By the time I came back they had all disappeared. I'll probably never know the outcome but at least there is an official record of this now. The truth is that I found it mildly amusing the first day when they managed to drive off with one carload of paving stones in broad daylight. However, when they came back for more that was just too much chutzpa.

About the name calling... I may have complicated things.

I was very relieved when DD didn't mention the 'different names' again today. Then, just as I was putting her to bed she told me, "X and Y keep calling me Samuel (pronounced Sam-u-el). This sounds a bit odd as Samuel in Hebrew is Shmuel not Sam-u-el. It's also not very offensive imo. But DD doesn't like it. "Why do they call me Sam-u-el?" she asked pitifully. "I don't know, how funny!" I answered, trying to make it funny. "Don't those two silly sausages know that your name is DD?" Woops.

Should I mention it to the teacher tomorrow or let DD fight her own battles?

Or we could try making the old voodoo sausages. :~P

Email ThisBlogThis!Share to TwitterShare to FacebookShare to Pinterest
Labels: life in Israel, motherhood