There are some things to do with traditional Edwardian lifestyles that I'm drawn to. Playing the piano, dressing for dinner and a pottager garden. All genteel pursuits of course - I'm not drawn to being a chimney sweep or washing the sheets by hand. I don't do any of the above but would like to, hence the piano thing here.

You my remember that last year I cut off the sprouting eyes from a few older potatoes and planted them to see what would happen. It was a totally unsuitable pot for potatoes but the foliage that emerged was quite pleasant.

Last week I discovered I liked fresh mint with hot water (I'm intending to save a fortune on tea, coffee, and milk). I took a cutting (get me - I mean I picked a bit) of mint from the kindergarten  garden (why do I always think of Al Quaeda leader when I say that?) and put it in water to sprout roots.When I went to plant the mint in the same pot that had incubated my potato plants that have long gone to the great vegetable patch in the sky, I dug into the soil and found a tiny new potato! Excitedly I rummaged around a bit more and found these. 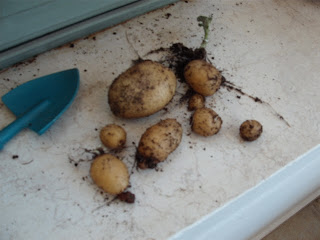 Thrilled was not the word. We had this for supper tonight (among other things). Sorry about the lack of focus. If you're wondering about the scale, this is a dish I have used to put salt on the table or for a few jelly beans at the end of a meal - basically two bites each. It was delicious though.


Now I've my eyes set on a bigger planter for next year's crop. This was my simple Ikea hack which was going to store the leftover tiles from the renovations and be a dinky coffee table on the balcony. However, it's now screaming potatoes! 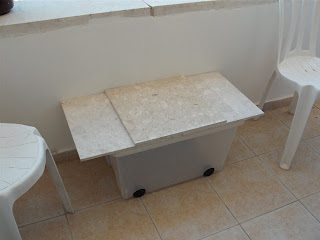 And I'm thinking of tomatoes too, if I can just find alternative storage areas for these files and clothes for DD to grow in to. 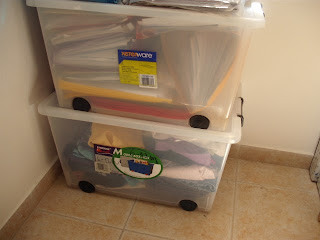 Did I mention that we live opposite DD's kindergarten? DD and I have offered to tend the garden (flowers, vegetables and herbs) over the summer break. It's not stealing to take cuttings from the tomatoes and herbs, right?

I used to say that there were three things I never understood: loving an animal, exercising for pleasure, and gardening. I'm down to two things I don't understand. I've got the gardening bug.

Here is the mint by the way. Only one sprig at the moment but I'm hoping for a mint takeover in that planter before the end of the summer. 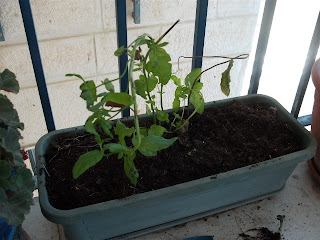