Whilst watering the kindergarten garden this week and picking a nice crop of cherry tomatoes and mint, my eye kept wandering to the kindergarten next door where the tomatoes were bigger and they had red cabbages growing. No one was tending their plot. As luck would have it, the teacher from that kindergarten arrived to do some prep for September. I told him he should pick some vegetables from his garden and he was surprised that anything had survived the heat. I offered to water it all for him as we were there anyway and he, of course, invited me to pick anything I could use. Win-win. This is what we harvested yesterday. 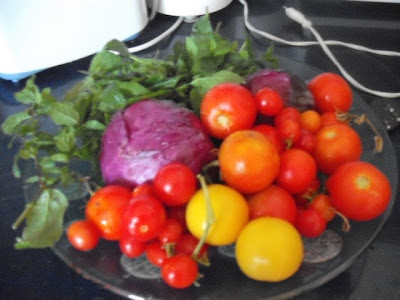