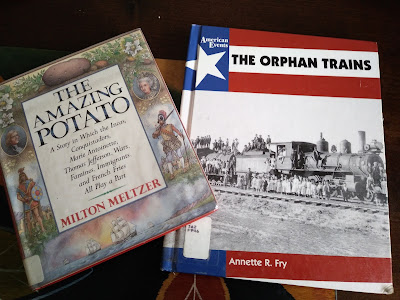 You can learn a great deal by reading children's books. Sometimes a short, light read ticks all the boxes regarding time and effort and 'bam!' you know a whole topic you previously had no idea about.

I recently borrowed these two books from the school library. The Orphan Trains by Annette R. Fry (1994, New Discovery Books, NY) and The Amazing Potato by Milton Meltzer (1992, HarperCollins, NY).

From the 1850s thousands of immigrants a week were arriving in New York City and Boston. Most of them from Ireland and Germany.

The Irish were initially escaping the results of the Potato Famine. Ireland almost solely relied on potato crops for food so a devastating blight in the 1840s led to mass starvation and emigration, mostly to America. This wave of emigration continued well after the end of the famine and into the 20th century.

The ships from Germany were carrying Europeans from all over Europe but especially Jews escaping persecution in Russia and Poland, and from the 1880s, specifically the pogroms. Later they were desperate to get out of Germany and all of mainland Europe. The Jewish emigration continued until after WW2.

Conditions in the city were terrible. Many families sharing apartments in already crowded tenements with no bathrooms, only a few toilets for the whole building, and shared cooking facilities. So many unskilled (for the city where farmers were not needed) people looking for jobs, rent to pay and food to buy, so much disease from overcrowding in unsanitary conditions, and no family planning. All this led to hundreds of children abandoned, living in the streets, or left in orphanages that were bursting at the seams. Some of them were orphans but many were from families who could no longer cope with another mouth to feed, single parents who had to work to survive, or children who ran away from alcoholic and abusive parents drowning in their own misery.

In 1852 the Reverend Charles Loring Brace saw the need to save the children if they were to have any chance of a good life. He believed that families were the answer, not institutions. The result was the Children's Aid Society of New York, founded in 1853. The society's innovative solution was to send children westward into the American interior where families could adopt them. Families who needed boys to help on the homesteads and girls to help in the house. And couples who just wanted a child, or another child.

Of course the book I read was written for children so it skipped over the fact that many of the children were treated as slaves and abused in their new homes. And many of them resented the fact that they had been sent far away when they already had families in New York. Many of them ran away from their new homes and did not end up as the upright adults they were 'supposed' to have been.

Fry relates the success stories of children loved and educated. Children who grew up to be lawyers, doctors, clergymen, mayors and politicians. They inherited property, they became parents and grandparent across America.

By the 1920s the Western States had big cities of their own with their own poverty and orphans to care for. They didn't want more children dumped on them from the East. Homesteading was no longer the way to make it rich and most of the land had already been claimed. People were more likely to be living in towns and cities where extra children weren't needed so much.

The last orphan train left New York in 1929. Over 200,000 children had been relocated on orphan trains and baby trains over 76 years. And yet, until the 1970s, hardly anyone had heard of this movement. People were secretive, ashamed of their lowly past or frightened of being stigmatized perhaps. Many of the Baby Train children were never even told that they had been adopted.

Some rough mental arithmetic suggests that by 1976, when everything changed, there were over a million Americans whose parents or grandparents were orphan train children and most of them knew nothing about it.

What happened in 1976? I found this fascinating as I remember the event well. In 1976 we all watched Roots on television. Alex Haley traced his family back 10 generations to a black tribesman, Kunta Kinte, who was kidnapped in West Africa and sold as a slave in America. Suddenly one's ancestry was something to be proud of, no matter how lowly. It was the beginning of popular interest in genealogy.

The last orphans now in their 50s to 80s started trying to find out who they really were. If they had blood relatives. Were they Irish or Jewish? And their children suddenly found out that their grandparents were their adoptive grandparents. The story was out.

The Amazing Potato wasn't so sensational except for the tragic chapters about the Potato Famine. It was interesting to make the connection between the two books. All history is connected after all.

One fact I loved in the potato book is that the potato was brought to Europe by the Spanish conquistadors who found people eating potatoes in Peru. They were after gold which they stole in great quantities. The potatoes were just what to eat on the journey home. The potato industry was worth $100 billion a year in 1992. (Almost 30 years later this figure has probably doubled or even tripled.) LOL, they should have left some of the gold and invested in more potatoes.