R2BC - The Carnival Has Started


The Carnival has started. Reasons 2B cheerful this week are all about Purim. The linky is at Becky's Lakes Single Mum and I'm proud to be among the cheery gang over there as usual.

1
Dressing up
I mentioned that when the Purim festivities started on Tuesday, DD did not want to go to school in pyjamas because it was silly. On Wednesday the dressing up theme was sports. She wore her trainers to school (as usual) to be sporty. Thursday was 'Angels and Hats'. I'm not sure if there is a connection between angels and hat but DD said, "I'll pass."

On Thursday night she slept over at a friend's house so we had to consider Friday's costume on Thursday afternoon. I think she physically shuddered when I told her it was anything to do with the circus. "Forget that!"

On Sunday it's 'opposites' or 'upside down' day. Boys can be girls and girls can be boys. (We're lending a dress and a hair ribbon to a little boyfriend.) You can do clothes inside out or upside down, black/white, teachers as pupils or pupils as teachers. "Why don't you wear your clothes in an unusual way?" I suggested. "Stop it! Don't be weird!"

Later she announced. "I'm just going to be opposite from what everyone else is doing and that's that."
"How are you going to do that?" I asked.
"Just by not dressing up and that's opposite."

I get off very lightly I know and appreciate. There are mothers with four or more children who all want to dress up fully for every day. And these costumes are just the build up. On Tuesday is the main Purim Parade when everyone wears whatever costume they like. DD is considering being a plain clothes detective. Or possibly not a detective at all and just a plain clothes. LOL.

2
Holidays
On Tuesday the schools break up for a few days holiday in which to dress up and celebrate the actual day of Purim. I have no college teaching on Tuesday so I'm thrilled to be off after only Sunday and Monday at school. Five days holiday! Woohoo! 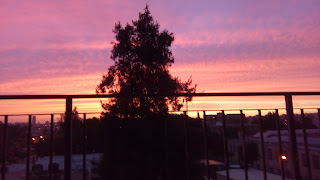 3
A Taxing Situation
I finally got my tax forms sorted out. It took three trips to the Income Tax Office. The first time I went on a Tuesday only to find out that they are temporarily closed on Tuesdays. So I went back last Thursday and got all the forms. I faxed them to the various companies that employ me from my college. The faxes didn't go through even though I got the receipt that said they did go through. So on Sunday I took them to school and faxed them again. One of them was wrong. I'm employed by three places on a salary but the freelance work was supposed to indicate a special category for writers on the form. I went back yesterday and got the form changed. On Sunday I'll fax it from school again. Almost there.

Meanwhile the tax summary forms are coming in from last year and once I have all of them, I'll have to take them to the Income Tax Office to get a rebate as I think I paid too much tax last year. It never ends.