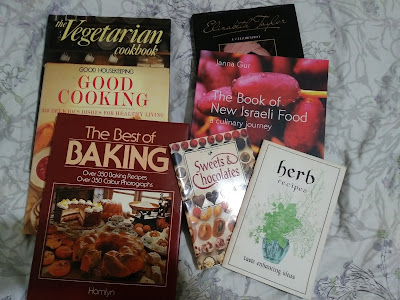 Getting rid of books is a basic part of minimalism and firmly planted in phase 1. I got rid of loads of books. However, getting rid of books is not the same as letting go of treasured books. Treasured books are books you once loved and maybe still do. You can't let them go the first time round but, as I've said before, the more you purge the easier it gets and the less you want to keep. Here are some books I let go of recently. It feels good.

In the photo above are seven books from the cookery and coffee table collections. I still have four other big illustrated vegetarian cookery books so the one in the photo could go - it's the least interesting. Good Cooking, from about 1982 is full of meat and seafood dishes that aren't relevant to me. I don't bake and if I do want to bake in the future (and the internet is down) I have a small cake book that I'm keeping. The Book of New Israeli Food doesn't say anything I don't know already. I'm never going to make sweets and chocolates as I don't even like chocolate and sweets are just sugar. I never treasured the herb book but I found it among the other cookery books so it's going.

I don't know why I held on to the illustrated biography of Elizabeth Taylor. I did read it cover to cover once and I enjoyed it but I wouldn't say that she is one of my idols or life mentors.

That brings The 1000 Clutters Challenge to 952 clutters decluttered and only 48 to go.

Two other books I let go recently but have already counted, are:

Mrs Fytton's Country Life by Mavis Cheek, St Martin's Press, 2000. I loved this book. Angela Fytton gets dumped by her husband of 25 years who goes off to marry his young mistress. He cleverly gives Angela the family home in lieu of any other payments because his teenage children can continue to live there while he and his pregnant new wife start over. But Angela decides she wants to go and live in the country and start over herself. So she sells the family home in London and buys a cottage in a village in Somerset. Obviously she has room for the children to join her. Obviously they don't want to and insist on moving in with their father. Obviously his new wife cannot object and everything in the love nest begins to fall apart.

Meanwhile Angela is embracing all things country. Until she finds out that the country also has its problems and deceptions. Hilarious characters like the baker who gets his bread from the dumpsters behind Tesco. He warms it in his Aga and delivers it to the villagers in a large wicker basket. "Of course it goes stale quickly - it's real fresh bread, no preservatives see." His wife spins and dyes wool which she knits into jumpers. Except that the wool is actually unraveled from jumpers bought in local jumble sales. Another family that moved to the country for more quality family time end up with an isolated and depressed wife, an absent husband because he found a convenient pied-a-terre in London, and sending their children to boarding school so that they don't have to mix with the local children.

I re-read this book. I loved it all over again but I don't need to read it a third time. So I gave it to a colleague who is retiring and I think she will love it too.

The Family at Red Roofs by Enid Blyton. This was a childhood favourite of mine and I kept it all these years. I read it to DD a few months ago. She really got into it. When the snobby friend was obnoxious DD sprang up in bed, wagged her finger at the book and scolded, "that's not how you treat your friends young lady!" On the other hand she asked why the girls aren't allowed to do anything and the boy was in charge of paying the bills even though he's younger. An interesting thing is that it was first published in 1945 but there is no mention of the war, or of there having been a war if it was published after September 1945. As I said, it was a childhood favourite of mine but it has somehow lost some of its magic. It won't be a childhood favourite of DD's even though she did enjoy it. The story has been republished many times, the last time being 2013, so DD could find the book again if she wants to (she won't want to). My copy was just about falling apart so out it went.

By the Way. As I was going through the cookery books I remembered A Proper Tea by Joanna Isles. I loved this book so much that I blogged about it here. I remember that a friend wanted to make a proper tea party for her birthday so I lent her the book. Now I can't remember who the friend was. Dear friend, if you read this post can I have my book back please.

And yet, if I don't get my proper tea book back, so be it. Minimalism does that to you, It's just things.

UPDATE: I remembered the next morning and my friend who has the book told me in the afternoon. All is good.