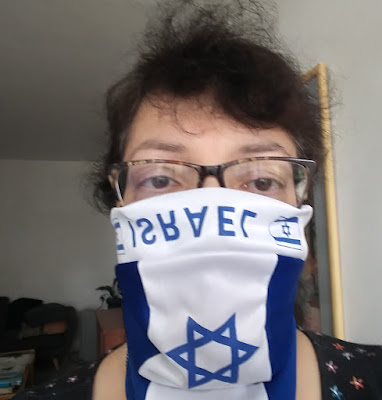 Here is a list of 10 things I've learned while we've been in lockdown.

1. In an emergency, and using four garden chairs for extra hanging space, I can push my clothes line to hold three loads of wet laundry whereas I always thought I was limited to two. But three is the limit.

2. With no time limits on anything and with all the time in the world, I'm getting much less done than I would in a normal working week. This validates the saying that jobs expand to fit the time available and, to some extent, if you want something done ask a busy person.

3. Countries need to be more self-sufficient in terms of agriculture and manufacturing. Individuals should be willing to buy less but pay more for local purchases, hopefully of better quality than purchases from countries where they exploit cheap labour and produce cheap goods.

4. I find myself wanting to avoid Tnuva products. Tnuva is Israel's biggest dairy conglomerate. In 2014 a controlling stake was bought by a Chinese company. Otoh, they bought it from a London based company. Otoh, we're here on the ground so if we need to take back control in an emergency situation I suppose we could. Otoh, I know nothing about global economics or international law. Meanwhile I find myself avoiding Tnuva where possible.

5. After about three years of serious decluttering and minimalizing possessions, it was very useful to find an old headscarf bandanna thingy (in fact I found two) that DD was given in nursery school for Independence Day about eight years ago. I don't even know why I kept them as they don't fit our heads as headscarves and we'd never want to wear them anyway. However, one of them made a great face mask for when I went to the supermarket yesterday.

6. I'm more scared of our police than I am of the virus. There've been reports of the police being over zealous and handing out 500 shekel fines to people walking to the supermarket or just walking within the permitted 100 m of their home. Yesterday I went to the smaller, less well stocked, and more expensive supermarket nearer my home because I was nervous about meeting the police on the way to the bigger, cheaper supermarket about half a kilometer away. And wearing the mask was also part of this fear even though masks are not yet law.

7. I have very little authority over how my 11 year old daughter spends her time at home.

8. Some of my doctor and nurse friends are seriously scared for their lives.

9. Neighbours who used to argue over the building maintenance and especially about paying for it, are all wonderful, supportive, kind, selfless, and thoroughly nice people. Who knew?

10. I can almost live on half my salary. I found this out after one of my two jobs put me on unpaid leave.