The Reasons to be Cheerful linky is being hosted by Lakes Single Mum again this month.

An arts and crafts project at school had the 2nd Graders put into groups of two, three, or four to make a Noah's Ark. I hate these types of project as they are homework for the parents. Remember when I had to make Mini Israel?

We got our group so I called one of the other mothers in the group. And then God answered my prayers when she said: "I was just about to call you. I'll take the girls home from school on Tuesday and give them lunch then my husband will make the ark with them. You don't have to do anything."

It turned into a family effort with T's big sister helping and her little brother lending his toy animals. The end result is amazing. Thank you dear people. Btw, I have put in a request to be teamed with you for every art, craft and science project for the duration.

It's February! I once described February as the Monday morning of the year. And it is if you live in Northern Europe. But here in Israel the weather has turned warmer and hints of spring are everywhere. We are still using the heating for another 6 weeks probably but only in the evenings.

Spring is in the air and the window is open (only one but it's a start). 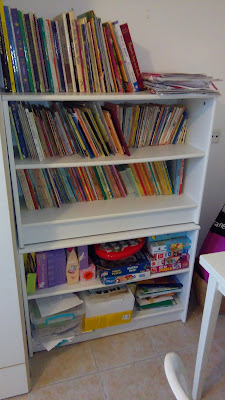 Putting these two tv-stand type units one on top of the other, has saved me about 100 GBpounds. That's what it would cost to have a tall Billy bookcase delivered by Ikea and built in DD's bedroom. It also means one less item of furniture in the living room (one of the units was already in DD's bedroom).

I'm getting the decluttering urge again. Partly because of Rachel Jonat's Minimalist Mom series on her blog (of the same name), partly because it's almost spring, partly because the Yedidya Bazaar is in just a couple of months, and mostly because I love the feeling of less stuff and more space.

It's Shabbat and we have a whole day of nothingness before us.