This Is Not A Love Story, It's Complicated

This week I read Keren David's sixth young adult novel, This is not a Love Story. Well I did love it so it was sort of a love story for me. 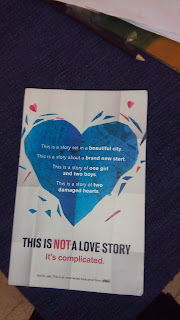 It's about three young adults who meet in Amsterdam. Each of them there for different reasons. None of them with parents checking up on their whereabouts - partly because of their personal circumstances and partly because it's Amsterdam. Of course they all fall in love but this is not a love story, innit? Unless you count falling in love with Amsterdam. If anything, this story shows how everything is about love - family, friends, where you live, who you are - even if you are not in a relationship. As the cover says, it's complicated.

For me the icing on the cake was that the main characters are Jewish in a way I've never come across in a novel for general reading. The plot is nothing to do with being Jewish, there are no pogroms or concentration camps, but at the same time the Jewish element is not shoved into a symbollic lighting the Chanuka candles party. Neither are there Jewish stereotypes like the wise old Rabbi or an overfeeding Jewish mother (who is invariably and irritatingly called Miriam in other novels). In fact it's about a couple of Jewish families in the way me and my friends are Jewish - not very, nothing to see, and yet all encompassing. Again it's complicated.

I have to admit that Keren David is an old friend of mine. I've reviewed her books before and though I did disclose this fact, it wasn't particularly relevant to the review. However, this time I took great joy in recognising some of the characters in the book. Some specifically and some less specifically. The less specifically identified characters were the parents in London who are all our (my friends and mine) fathers and all our mothers (except for those with weird parents).

One of the characters goes to my nephews' school and he and his friends are all their friends. Actually they're all my friends from thirty years ago but with slightly different Jewish slang and internet.

I love the way Keren included Jewish vocabulary without explaining it. I can't believe the editors let her do this but it does make the whole thing more credible. Don't you hate it when characters in a book say things they obviously both know already for the sole purpose of explaining to the reader? Like they're in a literary version of the Truman Show? Well there's none of that, thank goodness.

In fact I've written my own TINALS companion book including any Jewish slang you might want to know. It's not very long so I've copied it here:

Batty and Barmy - short for Bat Mitzva (for a girl) and Bar Mitzva (for a boy).
Neb - short for nebishe or nebekh, a pathetic person that we all feel sorry for.
Youth Movements - not Yiddish but quite a Jewish thing. National youth clubs with an ideology over and above having fun, very much like Scouts.
Beck - rich young Jews with designer clothes and expensive social lives.
Frummer - an orthodox Jew.

If you want an extremely good book to read with the added bonus of an insight into my family and community, read this book.

Email ThisBlogThis!Share to TwitterShare to FacebookShare to Pinterest
Labels: Books