My new favourite You Tube channel is Cooking With Plants. It has amazing vegan recipes and it's not complicated or boring. Anja Cass gets straight to the point and cooks the food without minutes of introspective blabbering about other things on her mind. And her kitchen is clean - I like that.

DD's favourite food is pizza. Seeing as she eats very little of anything, I try to give her what she likes. Obviously I don't want to give her the sugar/salt loaded commercial pizzas and (also obviously) she won't be fobbed off with my pita bread pizzas or plain cheese on toast.

I wanted to be that mum who made homemade pizza from scratch but the dough bit seemed like such a bother. Until I saw this no knead pizza dough recipe from Cooking with Plants. And then I noticed that she used exactly the same dough for her country style bread. It looked so easy it would have been rude not to try it. So I came over all earthy and had a go.

First I made the dough. I dug out a solitary packet of instant yeast from the back of the cupboard. I mixed it with the flour, salt, and some other herbs, and then added water. Nothing had happened after nearly two hours so I concluded that either the yeast was so old it had died, or it was not in a warm enough environment.

As I'd made the dough in a plastic bowl I couldn't put it in the oven (on low) so I put the whole bowl into a bigger bowl and poured boiling water into the inter-bowl space. That seemed to do the trick. 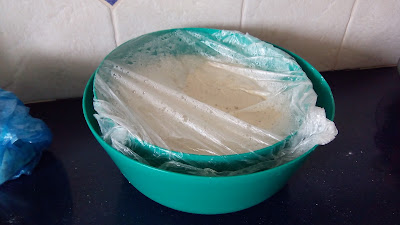 Then DD helped me make a traditional pizza with corn and olives. Guey dough everywhere. Ugh! Next time we agreed that I'd roll the dough and she can put on the toppings. I admit the tomato sauce came out of a plastic cube that looked like tomato puree when I bought it but turned out to be spaghetti sauce - I absolutely do not buy spaghetti sauce. 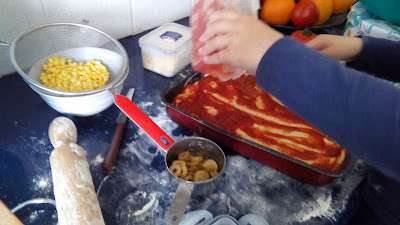 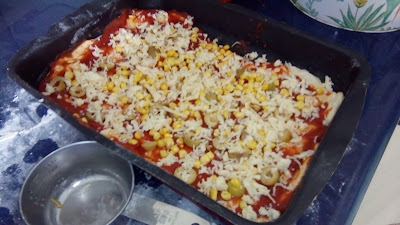 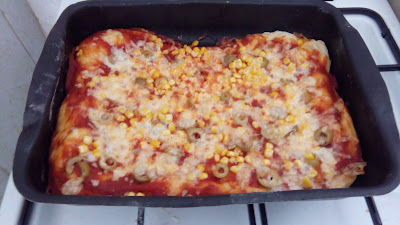 Then we made a pizza blanca with olives and cheese because we'd run out of tomato sauce. And actually we like that better. 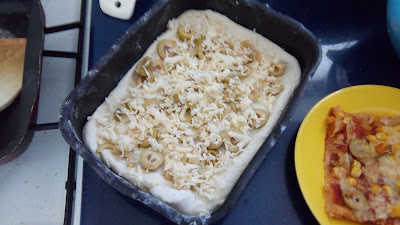 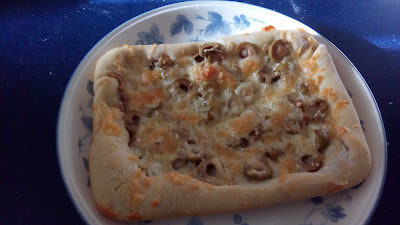 After that we had no more tomato sauce or cheese so I thought I'd try the olive bread. I made rolls and they were delicious. 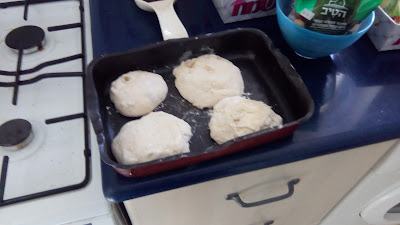 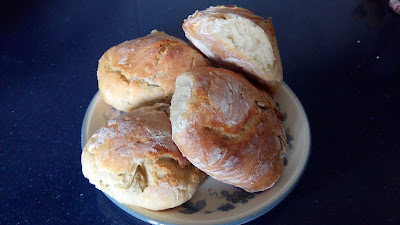 It was so easy I will be doing this again often. I've already bought more whole-wheat flour and new yeast. Watch this space for Earthy Midlife Singlemum. :~)