Here is the final round up for the Yedidya Bazaar 2016. Personally I will say that we were well and truly booked. 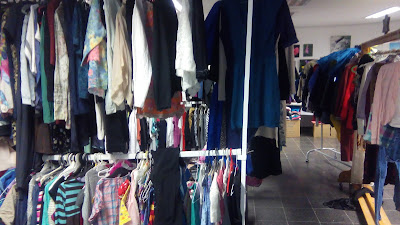 In the end I added another bag to the six large bags I donated on Friday morning and was delighted with the feeling that seven large bags of children's clothing, books, toys, and table cloths had been removed from my house.

I was most pleased with the fact that we went through all of DDs clothes and shoes. We kept about 10 light dresses, mostly for this summer but a couple to grow into; about 10 assorted skirts for this summer, next winter and beyond; and about 20 T-shirts for this summer. We also have three swimsuits that still fit. I want to emphasize that every item is either a hand-me-down from my friends with older girls or a gift from Grandma or my sister.

I was well pleased, DD's wardrobe looks neat and tidy, and I made a mental note not to buy any new clothes when we go to London for Passover (footwear is another matter but no clothes). I will buy a pack of cheap tricot shorts in the local market and we're done.

On Saturday night I got a phone-call from a friend, "We are just about to take a load of my girls' clothes to Yedidya. Would you like to look through them first to see if there's anything you can use?"
Me: "Thank you but we really don't need anything. I'll be working there tomorrow so if I see anything nice I'll be happy to pay the 2 shekels to buy it back. But I really appreciate you thinking of us."

On Sunday I worked at the bazaar, unpacking donations, sorting, hanging and folding clothes mostly. Another friend with older girls and a Grandma in America, brought a load of clothes her girls had grown out of. She kept holding up items and asking, "are you sure you don't want this for DD. It's really nice." Everything was really nice but we just don't need to have a shop's worth of clothes in our home for one little girl who anyway lives in shorts/trousers and t-shirts. I understand that it's hard for people to give away well loved clothes that their children have worn but I was determined not to ease their consciences by cluttering my own home.

I did "buy" one pair of winter boots that were labelled size 39 (my size) but the woman who donated them said she'd bought them without trying them on and they were way smaller than a 39. DD fell in love with them and has been wearing them around the house (she is an almost 34).

I also took four teaspoons made of heavy stainless steel. In Israel the cheap cutlery is so flimsy that the spoons bend when you try to scoop out ice-cream. Sturdy cutlery is very expensive. So I collect. I have a few pieces from my parents' downsizing efforts over the years and a few pieces from sales. Eventually I will donate all my cheap flimsy cutlery back to the Yedidya Bazaar - maybe next year even.

And I "bought" a small bag of china fairies. We are into fairies atm. There were seven fairies in the bag. After one play session and multiple drops on the tiled floor, there are two still in perfect condition. I wanted to chuck the other five but DD earnestly told me, "I'm not throwing them away just because they haven't got one hand, or a foot, or a wing. What? Do you throw people away just because they don't have one foot? It's not their fault and they're still a person." I couldn't argue with that so we're keeping all the bits of china. *sigh* I did manage to persuade her to chuck the one whose head fell off.

But mostly we were booked. Someone (or someones) had donated a whole library of those Daisy Meadows fairy books and other princess, cupcake, etc... type books. I took a load of them but limited myself because I was there right at the start so it wasn't fair to hog too many.

The next day we went back to pay and I let DD choose more books. They were fair game by the second day. From the book section I got five books for me, a couple of dvds, and about 40 books for DD. I'm already bored out of my mind at bedtime story time. This child needs to improve her English reading asap!

Results: Almost 12,000 shekels was raised for charity whch means that almost 6,000 items were shifted from homes where they are not needed to homes where they are needed. We acquired 50 items for 100 shekels (about 20 pounds at today's exchange rate) and we are going to save a mint in London by not having to buy any books (or schlep them home).

Unbelievably, only two days after the bazaar, I already have a few items in my 'donations' shelf above DD's wardrobe towards next year's contribution. There were cupboards in the kitchen I didn't get to yet, I didn't declutter the sheets and bedding, and my clothes have not been weeded in about 15 years. Oh well, only 12 months to go until the Yedidya Bazaar!