It Was Hard To Move On - #Harry Potter 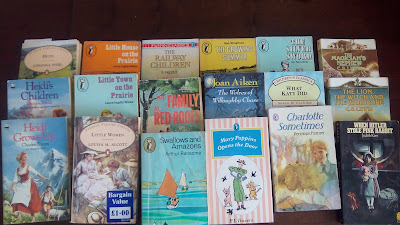 After spending seven whole months reading Harry Potter almost every night, DD found it hard to leave Harry, Hermione, Ron and the crew behind. She once even suggested that we start again from the beginning. I told her that I read it to her the first time, next time she's on her own.

I know she'll read it all again herself when her reading skills improve and I'm happy that she will. Talking to a friend who is also reading the series to her son, we both said that we read the books so fast the first time round - through one weekend and through the nights because we couldn't put them down - that we missed or forgot much of the detail. This time round I found depths and subtle (and not so subtle) allusions that I'd not thought about the first time.

Meanwhile I was trying to get DD to agree to starting a new book. All she wanted to talk about was how we don't know who Luna married and do I think it's Neville or Dean? What she doesn't know is that I'm going to buy Pottermore and The Cursed Child (when it comes out as a novel rather than a play script). - UPDATE: I've read the reviews of The Cursed Child and I'm not going to bother.

I offered many options but over a week passed with no story. I was sad. I have so many of my old favourites waiting for me to read to her. Books I saved 40 or more years ago to one day read to my hypothetical daughter. Others I lost but have bought replacements over the years because I love them like childhood friends.

Look at the photo - how many do you recognise? There are others of course, which I fully intend to get. The Children of Green Knowe, When Marnie was There, Carrie's War, Marianne Dreams, to name but a few.

Eventually DD agreed to let me try reading Heidi to her. After a long trek up the mountain from Mayenfeld to the Alp Uncle's cabin via Dorfli and Peter's house, DD said, "I bet they like each other." She's astute. As I read the second chapter she squirmed around in bed exclaiming, "I love hearing this story. She's so cute. Aaaah he loves her!"

I think we've found another winner and we have moved on.