Fasting For Love And Reconciliation 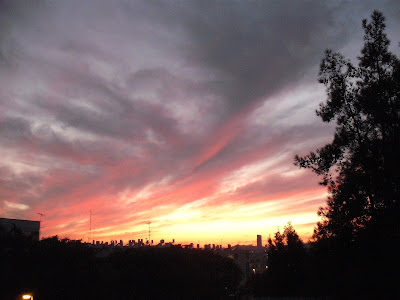 I spend much of my life trying to find a meaningful way to participate in a religion that I feel is increasingly outdated and bogged down in unnecessary ritual. One of my biggest problems is that if we are living the 'right' way, then everyone else must be 'wrong'. Another bugbear of mine is the insularity and exclusion of others encouraged by the laws of keeping kosher and the strict rules of keeping Shabbat. I am Jewish but I want to live a life that is relevant to humanity and the planet Earth not just to a small sect within it.

The 9th day of the lunar month of Av is designated as a Jewish day of mourning. We observe a 24 hour fast from sundown tonight until sundown tomorrow evening.

There are seven fast days in the Jewish calendar. Five of them are minor fasts - from sunup in the morning till sundown in the evening. They all commemorate various events in Jewish history and I don't really identify with any of them. It actually annoys me that we are told to fast on these days but no rabbi has the power to instigate a fast for victims of the Holocaust. As if Judaism as a dynamic religion died some time in the Middle Ages. Others argue that the Holocaust is included in the mourning of the 9th of Av.

The 9th of Av (Tisha B'Av) is one of the two major fasts. The other one is Yom Kippur. Yom Kippur is the Day of Atonement when we fast to concentrate on atoning for our sins made during the previous year and promising to try  better in the coming year. I can understand and identify with this fast and I participate in solidarity with Jews all over the world.

I was always taught that Tisha B'Av is the day that the Temple in Jerusalem was destroyed (both of them, conveniently enough). And that this is a big deal because it lead to the dispersion of the Jews, the loss of a homeland for 1878 years, the loss of independence and the resultant suffering imposed upon us over the ensuing centuries (the Spanish Inquisition and expulsion, blood libels, pogroms, the Holocaust, etc...).

I can identify with this explanation and support it to a point. It still feels a bit like an enormous pity party though. Whilst I am sad about all the pain and suffering, I'm not so much into highlighting victimhood.

Dig a bit deeper and we are taught that the reason God let the Temple be destroyed was as a punishment for baseless hatred among the Jews of that time. In other words, corruption, greed, undue punishments, jealousy, and the pursuit of power for the glory rather than for the good.

My friend Rinat, wrote on Facebook today that she is fasting as a stand against baseless hatred. I can totally get behind that. This also appeals to my sense of global citizenship. We tend to be far too insular much of the time and Lord knows that the whole world could do with some love and reconciliation, not just us Jews who are, admittedly, also far from perfect.

So tonight at sunset and for the first time in many years, I will be observing Tisha B'Av and fasting for 24 hours as a protest and a prayer against all the baseless hatred in the world. I will try to focus on love, reconciliation, and peace for all mankind, for all religions, for all races, for all nationalities. This is my prayer and my hope for all of us on this beautiful planet.

Disclaimer: In 30+ degrees heat I do drink water. This is not an exercise in making yourself ill.