Here are my Reasons 2B Cheerful for this week, It's a mixed bag. And as usual I'm linking up with Michelle's R2BC over on Mummy from the Heart. 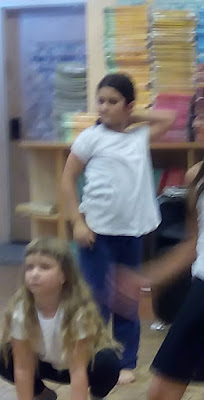 1
Sexy Zumba
DD had her end of year performance at Zumba. It was the first time she's ever performed in anything and she was so excited. I sat in the middle of the second row, camera in hand, almost as excited as she was. Reader, it was a complete comedy. They were very sweet as they danced to, "C'mon c'mon turn the radio on, it's Friday night and I won't be long, I ain't got cash, I ain't got cash but I got you baby."

I was ROFLing (well not literally - ROChL?) as 12 eight year olds tried to look all sultry and sexy. Shimmying their shoulders and sashaying their hips, the hands on the backs of their necks, the pouting lips, the long pointed arm with the wiggle of the index finger....

2
Pension Planning
Today I had a two hour skype meeting with a money management person. She's not a financial consultant but more of a guide to help you sort out what you've got, where it is, and how to access it. I've worked in so many different places over the past 30 years and each one had a different pension plan. I kept all the paperwork of course but it's all in Hebrew. The numbers are not in Hebrew obviously, so I had some idea of what was in each plan but not what it meant in terms of pension.

My favourite was a pension plan that I started 25 years ago with 10 pounds a month contributions and stopped after two months when that job didn't work out. That 20 GBP has grown to about 125 GBP and will yield about 4 pounds a month in pension when I reach 67. That was the most ridiculous but I have some more small amounts in various places and Debbbie went through all of it and told me how to go about consolidating it all into one of the larger pension plans.

After two hours I was exhausted but very happy to have it under control and to have the knowledge necessary for planning for the future.

3
20th Maccabiah Games
That title is a bit misleading because I had nothing to do with the Maccabiah Games - the Jewish Olympics held in Israel every four years. I'm very proud that over 10,000 Jewish athletes from all over the world came to participate, and that the spectacular opening ceremony took part in Jerusalem tonight, but sport isn't really on my radar.

My Friend, Sally-Anne, however, has a sporty family and a niece competing in the swimming. The whole family came over from London and had tickets for the opening ceremony. So to make it even more of an event S-A made a spectacular pre-ceremony BBQ on her terrace. That I went to with great enthusiasm. It was fun catching up with S-A's family who I knew years ago in London where we were neighbours as kids. And though I enjoy watching Wimbledon and ice-skating, I have to admit that one of my favourite participation sports is chewing.

4
Laid Back and Back in Narnia
Apart from all this, we are one week into the summer holidays. I've tidied my apartment but not yet cleaned it, I'm still finishing off with students from last year's English course who have until the end of the month and the summer course has begun, but it's all online so no pressure. It's 10 pm but there's no Summer School for DD tomorrow so she's still pottering about. As soon as I post this we're going to have the next chapter of Prince Caspian. Yes, we're on the fourth Narnia book and (amazingly) still enjoying it.