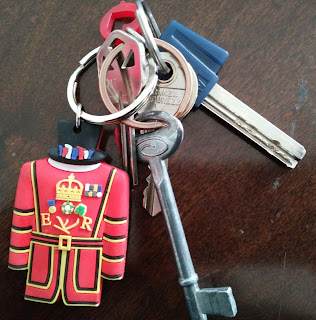 We have entered a new era here at the Selby household. Whole new vistas have opened up for both me and DD. And we didn't plan any of it.

DD's school finishes at 2.20 on Sunday afternoons, after which she has an art class in school followed by the Learning Lab until 5pm. My school finishes at 2.55 and it takes me an hour to get home on the bus. (On the days when DD has no after school activities, she goes to an afternoon programme costing £100 per month.)

Today both art and the Learning Lab were cancelled. I was going to call the afternoon programme teacher and ask if DD could go today for a couple of hours. I've done it before, it's not a problem.

However, on Wednesday evening she is playing in a concert. She and a friend have a duet which they have to practice together and today after school was the only opportunity. The friend is not in any afternoon programmes and goes home by herself on the bus at 2.20. We live opposite the school.

The best solution was for me to give DD a front door key and let her and her friend come to our place after school. I wasn't a hundred percent comfortable with it but it was the only solution.

At 2.20 I was teaching a class of 4th Grade girls at my school. I asked them how many of them have a front door key and go home by themselves, letting themselves into an empty house. 25 hands went up. Right. Ok then.

I let them out early as I was anxious to get home. I left school at 2.50 and was about to call home when I met a parent I wanted to speak to. Then I stopped to chat to another parent. Well it was outside the school gates at home-time so obviously I'd meet the parents. Then my bus came pretty promptly so it wasn't until I was on the bus that I could make that phone call. But actually, I was confident by then that if I'd not heard from DD (via her friend's phone) that she can't open the door or she's lost the key, then all was probably ok.

I called and guess what, it was fine. They were at home eating crisps and playing, Not playing the clarinet and flute as they were supposed to, but you can't have everything. More importantly, they were safely inside the apartment.

I often leave DD at home alone if I pop out to the shops and she also walks home from school by herself as we live opposite the school. But this was the first instance of latchkey-kid life. And I like it.

I sat on the bus knowing that next year we will be saving £100 a month on the afternoon programme. This made me happy enough but then I realized that even from tomorrow, by putting a door key into the secret pocket of DD's schoolbag, I no longer have to worry if I'm delayed getting home, I can get off the bus and go shopping on my way home after school, I can go out for coffee on a Friday morning and be back around the same time as DD - give or take 10 minutes. The pressure to finish everything I'm doing by the clock according to DD's schedule has just vanished. I'M FREE-ish!