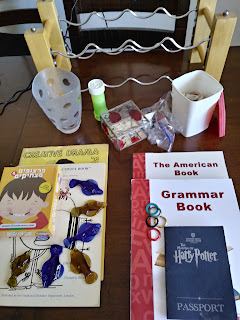 I think I'm done for this month with The Minimalist Game. I have a house guest who is using the spare room so some of my study stuff is in my bedroom which makes it hard to organize the bedroom. I also can't go rummaging around in the study. And it is Pesach (passover) at the end of this week which  involves all sorts of preparations that take priority over decluttering. That said, I still keep seeing things I could get rid of and I fully intend to pick up days 24 - 30 (or even 31) after the festival.

March 21st: Random objects from around the house. 2 more English language textbooks, 2 youth leader handbooks (going to my nephew who is a youth leader), a game that we never opened (into the re-gifting cupboard), 6 glass fish from the Arab shuk, a Harry Potter passport from Warner Bros. Studio, some coloured metal rings from a wristwatch long gone, a box of seashells (plenty more where they came from), a bag of rubbishy bits from a collect-all dish (moral: don't have collect-all dishes), a glass vase (I hate cut flowers anyway - much rather have plants), a glass box, a bottle of bubbles, and a wine rack.

About the wine rack. I used to pride myself on having stock. I entertained a lot and for many. Each week we could go through a couple of bottles of wine and the guests would bring more as a gift. This is no longer true. I entertain much less, there are more children around my table these days, and many people no longer drink alcohol. Even I hardly ever drink alcohol anymore. I say 'even I' although I never drank much but I did like a glass of red with my dinner. So nowadays, if I ever have one bottle of wine leftover from a dinner party I tend to keep it in the fridge (yes even the red).

If numbers are your thing, you may have noticed that the items only add up to 19. That's because the other two are 200 piece jigsaw puzzles that DD never does and they're very easy for her. But she won't let me pass them on. So I have to wait until she's not around and then I'm going to put them away for at least six months to see if she even notices. Which she won't. 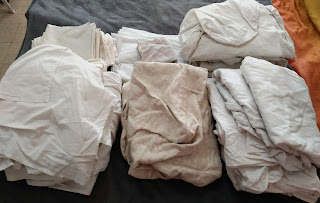 March 22nd: I went through all my sheets. Here is a pile of 22 mostly sheets and duvet covers in white, now dull white. I've kept a few in a high up cupboard to use as dust sheets when I next have the place painted. There is also a pile of cushion  material, some of which I am going to use to re-cover a director's chair I have waiting patiently to be re-covered. One old white skirt and another old flannel washcloth. 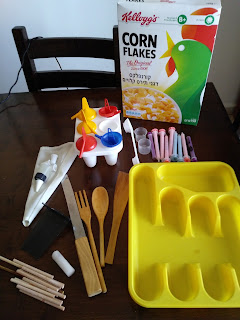 March 23rd: Into the kitchen. That enormous box of cereal was on sale about six months ago and it's still three-quarters full. I thought it would be a good snack as were're not breakfast people. Turns out we're not cornflakes people either.

Also in today's haul... 9 plastic syringes from children's medicine, 2 medicine measuring cups, one plastic measuring spoon, an ice-lolly mold, an icing set, a cutlery tray, 4 wooden utensils, an old candle end, a plastic separator from the juicer jug (that I forgot to include when I sold the juicer), and a pile of ice-lolly sticks.
Posted by Rachel Selby at 3/24/2018 12:41:00 PM