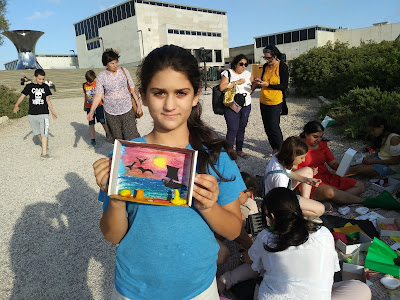 Yesterday we had the closing even of the Artists' Classes. I wrote about last year's fabulous event here.

To remind you, this is a small class of up to 15 pupils who have a passion for art. They do weekly art sessions in school and every couple of months they go to the Israel Museum for a special tour or project. There are about 50 primary schools in Jerusalem who take part. Contrary to folk 'wisdom' in the rest of the world, the programme includes Jewish, Arab, and 'Other' schools; secular and religious. We don't need Madonna to tell us how to work together.

Yesterday we went to the Israel Museum well prepared with our own bottles of water and summer clothing but the weather was mild, even a bit chilly. We already knew the drill. Daphna from the Museum made a short opening speech in Hebrew and in Arabic. She welcomed 43 schools and reminded the children that there is no 'right' or 'wrong' in art. Whatever you create is your truth.

Each school had an area of the sculpture garden. We had a tree-top previously painted by our wonderful art teacher, Moriya. And each child had a box in which to draw a background and then make a sort of diorama. The boxes would then be stuck onto the tree and displayed with all the other trees in a forest of artistic creativity.

The backgrounds were supposed to be a view or sculpture from the museum but our children mostly opted for sunsets or country scenes. DD did a beach. But by the time all the diorama's had been completed with all sorts of incongruent additions, very few of them were specifically identifiable as Israel Museum based.

Unlike last year, the children really didn't need our help. I gave DD a couple of ideas at the end and helped her cut out the birds and the boat. Mostly I walked around spying taking an interest in other schools. The school where I teach was there with three of my own pupils so I hung out with them for a while and chatted with the parents. Like last year there were loads of people I knew who have children on the programme from other schools. Jerusalem is like that. Still small enough to know people.

Here are some of the other trees from other schools You can click on the photos for a bigger picture:

We didn't stay for all the speeches at the end. We learned something from last year. We slipped away and came home on the bus. On the way from the bus stop we stopped to buy half a watermelon for today's event in school. It never ends. It's that time of year.