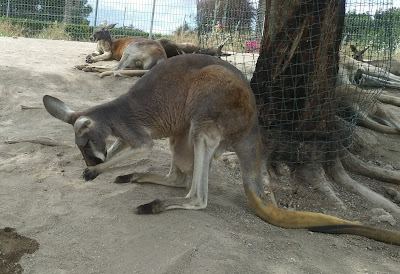 The photo on the Reasons 2B Cheerful post on Saturday, mentioned Gan Garoo in the Beit She'an Valley. The valley is part of the Jordan Rift Valley that runs all the way down the Jordan River to the Dead Sea. Beit She'an is just south of the Sea of Galilee.

I love this area of Israel. It's where I spent a year on a kibbutz for my gap year and it's absolutely beautiful in the spring. Luckily our Independence Day was just at the end of springtime, and this is when we have a tradition (of two years standing, lol) to go away for the whole weekend - even if Independence Day doesn't actually fall on or near a weekend. (We take Fridays off school when necessary and it's allowed because Friday school is only until 11.45, the children are in school six days a week, and their only day off is Shabbat when many people don't travel or spend money. And anyway there is no public transport on Shabbat. Everyone agrees that some flexibility is essential.) 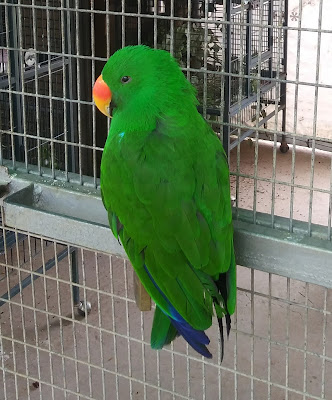 So this year, after the Independence Day Eve fireworks and street party in Jerusalem, we traveled up the country on Thursday morning. On the way to our guest house on Kibbutz Kfar Ruppin - actually a delightful cottage in the countryside, we stopped off at Gan Garoo. It's a play on words. Gan means garden and garoo could be 'where they live.' The 'they' in this case is kangaroos, koalas*, and parakeets from Australia. (Although by now all of the animals are several generations born in Israel.)

Israel is anyway replete with eucalyptus trees that were imported over 100 years ago to help drain the swamps. So walking into Gan Garoo was not so different from the animal sanctuary I visited once near Sydney. The Gilboa stood in place of the Blue Mountains, the sky was blue, but it was only a two hour drive to get there as opposed to a 28 hour flight (or flights) to Australia.

*Okay I'm coming clean about the koalas. There weren't any. Apparently the last one died 18 months ago and they are still negotiating getting some more from Australia. But we did walk among the kangaroos. They were mostly dozing in the sun and the children could pet them. I saw one with a joey in her pouch. Who knew that they go in head first with their legs sticking out? (Someone tell E. H. Shepard. I will never trust Little Roo again.)

The children loved feeding the parakeets with bits of apple on sticks. They were very easily bought tame. You just held the food next to your shoulder or arm and there they landed for a perfect photo op. (Not for us - DD and I didn't want any birds landing on us. No thank you.) 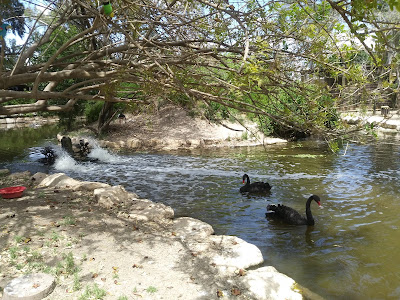 The other attractions at the park included a Dinosaur Maze, a children's playground, a picturesque pond with black swans, and a variety of puzzle 'mazes' for the children to work out. And bats which were actually quite fascinating.

The Dinosaur Maze was amazing. (See what I did there? ☺) The paths were like walking through a forest and around every corner was a life-sized model of a dinosaur. Many of them moved and roared or quietly chewed leaves. It was very realistic and sort of thrilling. There were also lots of interesting facts to learn. Well I thought they were interesting. The kids were more interested in getting lost in the maze and trying to find their way out.

Do you know why dinosaur fossils and bones have only been found in Israel near Jerusalem, in the north, and in parts of the Negev Desert? I.e. none in the centre of the country? Here's a hint - the centre of the country is the coastal plain. Here's another hint - Jerusalem, Haifa and the Galil in the north, and parts of the Negev are mountainous. And the final hint - Dinosaurs only lived on land and not in the sea. (Answers on a postcard - the chances of the diabolical Israeli Post Office delivering them is less than 1%.)

I don't know why I don't have any photos of the dinosaurs. I thought I'd take some. Oh well, next time.

We spent a good few hours at Gan Garoo. I don't remember what it cost because a friend of a friend got us reduced tickets through some membership or other. We bought coffee and ice lollies in the shop but rather than picnic in the pretty grounds, we decided to go elsewhere for a proper lunch.

All in all, a great day out and highly recommended. (But you need to avoid it between May and September if you hate extremely hot weather, as we do.)