Lag B'Omer Beyond The Fire 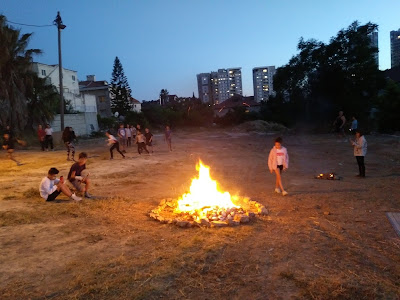 It was already a month ago but I wanted to write about Lag B'Omer this year because our traditional class bonfire was different and it gave all of us parents pause for thought. But before I get to that I have to re-frame Lag B'Omer as a rational holiday.

The mini festival marks the 33rd day of the counting of the Omer. The Omer is the seven weeks between Pesach and Shavuot (Passover and the Feast of Weeks). In religious terms those seven weeks count the time between the exodus from Egypt and the giving of the Torah on Mt. Sinai. In practical terms, they were the seven weeks of the grain harvest (barley first and then wheat) that called for a celebratory feast at the end. It's no coincidence that Christians count seven weeks from Easter Sunday till Pentecost (or Whit Sunday).

In the Jewish Year, the Omer is a time when we don't celebrate weddings, cut our hair or do any frivolous partying. Obviously, there was no time for any of this when everyone had to help with the grain harvest. So of course the rabbis had to come up with a reason for this period of semi-mourning, which wasn't mourning at all but rather a time of concerted and focused effort on one project - the harvest.

Its all a bit silly really. They say that 24,000 of Rabbi Akiva's students died of a plague during this time because they didn't show enough respect to one another. You couldn't make it up. Oh, they did make it up. And on the 33rd day of the Omer, the plague stopped. Hooray! What probably happened was that 24,000 students fell in the battles against the Romans and on the day that happened to be the 33rd day of the Omer, either they had some minor victory or the war ended. That would tie in with the fact that traditionally children used to play with bows and arrows on Lag B'Omer.

It's also supposed to be the deathday of another great Rabbi. But we don't celebrate the births or deaths of any of the real central figures to Judaism - Abraham, Joseph, Moses, Kings Solomon and David, or even any of the prophets, or, in fact, any of the revered characters to whom God actually spoke (Samson, Daniel). So 1. Bonfires and parties are a funny way to mark someone's death, unless it's Guy Fawkes or Hitler. And 2. If we're celebrating someone's life I'd rather it be Theodor Herzl who paved the way for a Jewish State and so saved thousands of Jews who moved to Palestine from being murdered by the Nazis. Or Alexander Fleming, Howard Florey and Ernst Chain who together discovered penicillin thereby saving millions of people from previously fatal infections and infectious diseases.

I can't find any reference to a natural or agricultural phenomenon linking Lag B'Omer to bonfires so I'm thinking that maybe at the end of the grain harvests they started to burn the stubble in the fields around this date? It could be. It's a theory.

So we have bonfires and parties to celebrate Lag B'Omer. It's huge in Israel. Every school class and youth club have an enormous bonfire and the older kids often stay up all night. I've written about it before.

Back to our class bonfire. We've had one every year with DD's class since they were four years old in nursery school. When they were very young the children largely ignored the bonfire and we kept them busy with some sort of activity. In 2nd grade the school had one large bonfire for everyone and a fair in the playground. No one was really satisfied with that and anyway, by the next year the open space next to the school had been turned into a proper football pitch with expensive astroturf. So no place for a fire there.

In 3rd and 4th grades the activity was the fire. The kids collected the wood and were fascinated by watching it burn - as we all are to some extent, let's be honest. The game was to build as big a fire as possible and to keep feeding it with more and more wood. However, this year was entirely different.

They built a moderate fire and the obligatory tiny hearth nearby on which to roast marshmallows. Then they spent the rest of the evening playing dodge ball (or king ball, or two camps, or whatever variation they play). Another group sat and sang songs. The parents provided far too much food as usual but we're the same as we we've been for years. It's the children who are noticeably growing up. It was a wonderful thing to see the difference between 9-10 years old and 10-11 years old.

In times of heightened awareness about air pollution and the environment, in which groups are being encouraged to attend central or shared bonfires, and forest fires meant that size and other restrictions were imposed countrywide, it was a good to see that our children have moved beyond the fire.