Lots of milestone events for DD this week and these are my Reasons 2B Cheerful. The linky is back with Mich on Mummy from the Heart.

1
Competition Squad
DD's biggest dream this year has been to be in the Competition Squad (henceforth known as CS) at gymnastics. She was mortally offended when one of the other girls was invited to join last winter as DD felt she was just as good.

On Monday she was given the official letter inviting her to join CS in September. To say she was thrilled and proud of herself wouldn't do it justice. She's been on cloud nine and mentioning it every few hours since.

Turns out CS for her age group meets two neighbourhoods away. We already take a taxi one neighbourhood away for gymnastics and then I sit waiting for an hour until we walk home afterwards. (Home is downhill so we walk it.) CS is two hours twice a week. With the added fee, the added taxi fare, and three hours out of my evening twice a week - this was not so amazing for me.

So we looked into the gymnastics class in our neighbourhood. The class is around the corner, three minutes walk from home, in a fantastic, purpose built high school sports hall. The only reason we didn't go there from September was because it clashed with orchestra and that's no longer relevant.

Turns out the same teachers from DD's class also teach at our local class - which is why the days are different. They invited her to join the new class in July so that she can settle in before September, August being holiday. And as we've already paid for July in the other place - there'll be gymnastics four times a week for a month. DD is overjoyed.

And I'm overjoyed as from September, she'll be going there by herself so I'll have two more free evenings and what we won't be paying in taxis covers the extra cost of CS. Win-win. 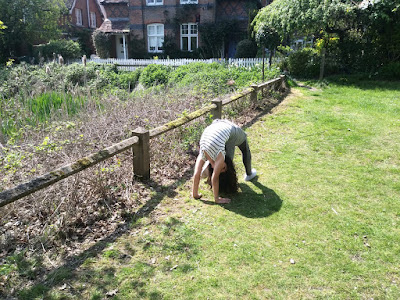 2
Shopping With A Friend
DD's friend wanted to go clothes shopping after school on Tuesday, in Malcha Mall - the biggest mall in Jerusalem. Her mother was going to come from work and meet them there. I had an appointment so I couldn't take them. The only solution was for the two girls to go on the bus by themselves.

In Israel, 10 years old is plenty old enough to go on the bus alone. Kids who travel to school do it all the time from 2nd or 3rd grade (and from 1st grade with older siblings).

DD was nervous. I downloaded Moovit onto her phone so she could follow the route and the app would tell them where to get off the bus. It even shows you which way to walk from the bus stop. But her friend knew the route anyway so she didn't really need it.

I waited at the bus stop with them and saw they got onto the right bus. DD's friend's mum called to tell me to tell them to ask the driver where to get off but apparently they didn't. Friend was confident that she knew.

I called Friend's mother. "Yes they're already trying on clothes. I'm beginning to regret this."

DD called me a couple of times to tell me that she was buying a gift for another friend's birthday at the weekend and then to ask if she could buy short leggings for gymnastics. She called to tell me she'd left her water bottle in a changing room and they couldn't find it. But while we were on the phone they found it in a drawer in the changing room. And every time I could hear the pride and satisfaction in her voice that she was out shopping with a friend. I schepped naches.*

3
Camping
DD's friend had an overnight camping party in her garden, complete with the new standing pool they've got for the summer. It started with a birthday tea/supper at 5 pm Friday night and finished at 2 pm the next afternoon after lunch.

Just as I was wondering what to do with my free Shabbat, the universe stepped in and I was invited to lunch with friends where there would be no other children. It's the kind of lunch I have to bribe DD into attending and I often just decline the invitation because it's easier not to go.

On Friday evening I got into my pyjamas at 5.30 pm and hung out with myself, a good book, and a cheese sandwich. I should have had some wine but I didn't think far enough ahead. Still, it was bliss. Although I did miss DD, a bit.

And today I went to lunch with my adult friends, had a great time, and on the way back I swung by the party to pick up DD. She came home very happy and very exhausted, fell asleep for three hours, and then we watched Journey to the Centre of the Earth together on Netflix. The perfect end to a perfect day.

Email ThisBlogThis!Share to TwitterShare to FacebookShare to Pinterest
Labels: life in Israel, lifestyle, Reasons 2B Cheerful