On Saturday night I was doing the washing up and happened to glance out of the window to see a sliver of new moon like a smile (or a cereal bowl) in the night sky. Aha, Silent Sunday! I thought and rushed to get my camera. However, on posting the picture, there was more to it than I had originally realized.

Here is the photo from the night of 25.2.12, looking west over Jerusalem. Just above the moon to the left is a planet. When I first saw it I purposely tried to incude it in the shot as I thought it was a bright star. But in fact, alerted by the one of the comments under my post, it is a planet.

I did some googling (as one does) and found out that on that night the sun, the moon, Mercury, Jupiter and Venus would all be aligned and visible to the naked eye. Some reports say that Mars was also present earlier in the evening but soon slipped below the horizon. And the show was due to continue on Sunday night 26.2.12.

So last night I took some more photos and I definitely got both Jupiter and Venus (below the moon) in these shots. Also interesting to see (if you can) is that the moon was partially eclipsed on two sides - the top and the right. One of the eclipses was the earth and the other... Mercury maybe? Anyone with a bit of knowledge on this subject is invited to leave a comment to enlighten us. Thank you.

Before I leave you with these pictures I want to mention that (the little town of) Bethlehem is about 10 minutes drive to the south of where I live. Some accounts speculate that what the Magi (the three wise men/Kings) actually saw in the sky may have been Jupiter. They came from the east and so they were looking west. Jupiter to the left of the moon would look like it was pointing south of Jerusalem (earlier in the evening than when I took this photo). Reader, I didn't follow the star. 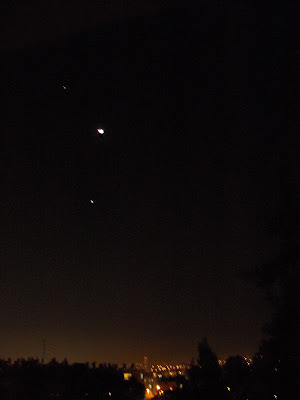 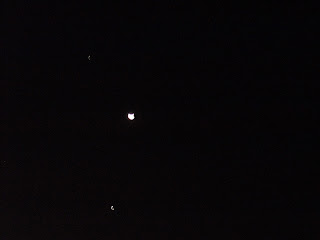