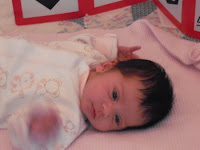 Just his week I'm feeling the baby years are really behind us and DD is growing up fast. We had easy flights to and from London (compare with this) during which she looked out of the window and told me, "Mummy, there are clouds on the floor." And, as we took off, "my ears are broken."


Also she has moved into her own bedroom without any fuss (take note all those doom-mongers who warned me against letting her sleep in my bed with, "you''ll never get her out you know." You know who you are.) 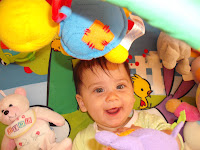 DD helps herself to a yogurt from the fridge, a teaspoon from the drawer and sits at her little table, opening the yogurt herself, licking the inside of the lid first. When she's finished she throws away the pot and throws the spoon in the sink.


She replenishes the toilet paper in the bathroom, taking out of the cupboard under the sink four rolls at a time and stacking them neatly on the shelf next to the toilet. 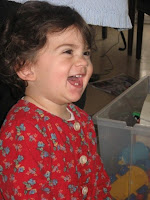 I can let her run around in the park with her friends while I sit and chat to the mothers (one eye out obviously) and I don't fly into a panic if I lose sight of her for a minute. It's fantastic to be able to trust that she won't run out into the road or leave the park without me, I've been waiting three years for that, eyeing the mothers on the park benches enviously.


A couple of nights ago she told me, from her bed, that she had spilt water on her pyjama trousers. I called back that it would dry and she should go to sleep. Checking on her later the damp PJ bottoms were on the floor by her bed. I assumed she'd just taken them off and gone to bed bare-bottomed. In the morning I saw that she'd actually taken another pair of PJ bottoms from the drawer and put them on. Added to this, instead of calling for me in the morning or running to find me as soon as she woke up, I found her busy choosing clothes to wear. 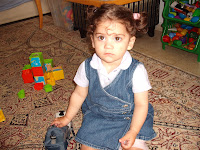 Then yesterday at the park I saw her take her shoes and socks off, put the socks inside the shoes and place them all in the bag on the back of the buggy, before climbing into the sand-pit. Only the day before she had come running to me to help her take off her shoes. 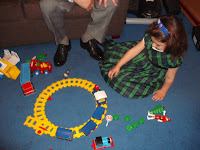 Obviously there have been new things learnt and new skills conquered almost every week of her life. I think it's the sudden independence that has given me the heads-up. Though the slight feeling of starting to become superfluous to (some of) her needs excites me rather than fills me with pangs of nostalgia for nappies and breast feeding.

Email ThisBlogThis!Share to TwitterShare to FacebookShare to Pinterest
Labels: motherhood